The Sioux Lookout Minor Hockey Association’s (SLMHA) Sioux Storm edged the Sioux Wolverines in an all Sioux Lookout U11 tournament final at the Sioux Lookout Memorial Arena. The U11 tournament ran March 4, 5, and 6.
That same weekend, the SLMHA U13 Sioux Storm team won the C-side Championship at an U13 hockey tournament in Red Lake.
Sioux Storm Coach Adam Kelly said of the U11 tournament in Sioux Lookout, “It went really well. It wound up being a six-team tournament, with two teams from Sioux lookout (The Sioux Storm and the Sioux Wolverines), two from Red Lake (the Red Lake Rebels, and the Red Lake Royals) and two from Dryden (the Dryden Teal Titans and the Dryden Blue Devils). There were a bunch of close games in the tournament and it wound up being both Sioux Lookout teams, the Sioux Wolverines and the Sioux Storm, in the final. The final was a close game, it was 2-1 down to the final minute. Both teams showed a lot of work ethic and the compete level was really good.”
While this was the last tournament for the U11’s for this season, it’s not the end of hockey, as Kelly added, “Going forward we are probably just doing fun three on three stuff with the kids, but this was our last tournament of the season.”
Looking back, Kelly stated, “The Sioux kids had a great year all around. I know for the Sioux Storm we played three tournaments and we won all three. For the whole group in general, it was a really good year. Our scores were close in most games. The overall compete level for all the kids involved, on both Sioux teams… all of them had major improvements throughout the year. The final was three to one (for the Sioux Storm). It was 2 -1 right up until the end with an empty net goal right in the last minute. The most important thing I guess is that both Sioux Lookout teams made it to the final and the development that all the coaches have seen throughout the year is just amazing for all the kids involved.”
Over in Red Lake, it was a six-team tournament for the U13 Sioux Storm. The Sioux Storm wound up taking the C-side Championship, but as Sioux Storm Head Coach Kevin Chabbert explained, it wasn’t an easy series of games.
“It ended on a high note!” Chabbert recalls. “We were one and three, but we ended up wining the C-side Championship. Overall, the weekend was good.  We didn’t have a lot of kids this year so with our numbers we put both teams (the Sioux Storm and the Sioux Wolverines) together, so we had a few more kids than we usually do. They came together really well and they played really hard. I think we were one person short of three lines, so it was 14 kids plus the goalie.”
Breaking the games down, Chabbert stated, “The first game we played against the Red Lake Royals, and they were strong, quite strong. But the Storm kept going and didn’t give up… they played their hearts out. They played well the whole game but I just think we were a little over matched there. But they didn’t give up at all.”
Chabbert continued, “Then we played against the Dryden Pythons, and we lost by a single goal. We had lots of chances and right down to the last seven seconds we had a chance to tie it up, but couldn’t quite do it.
“Our third game we played another Dryden team (the Cyclones) and we lost by one goal again. That team had beaten us pretty handily in our Sioux Lookout tournament the weekend before. We had a lot of chances to win but just came up short again.”
It was in their final game that the Storm managed to turn things around. Chabbert shared, “For the final we ended up playing the Dryden Pythons, again. That was the team we lost 1-0 to earlier in the tournament, and we ended up winning 4-3, so it was nice to come home with a win and being that it was the last game that we played, that was a nice feeling. “
Looking back on the weekend, Chabbert commented, “They never quit and they played right to the end so that’s all you can ask of them. Colton Whiskeyjack had a goal, and I would say our best player for the weekend was Clayton Sulkers. He was our goalie and he kind of kept us in a few of those games.
“The kids played hard. Even when they were down, they played hard. No matter what the score was they kept playing their hardest. That’s all we can ask of them. Overall, I’d say all the kids just keep getting better, and I think we had a lot of fun.” 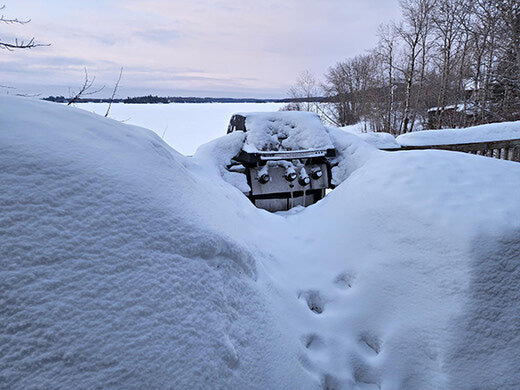 The smell of wings barbequing on the outdoor grill wafted pleasantly enough on the sunny spring air, across the deck, from flame to face, and jumped right up the nostrils...