A Junior Canadian Ranger team representing Northern Ontario did well competing in the annual Junior Ranger national marksmanship competition.
“They didn’t win any medals but they shot well,” said Captain John McNeil, the Canadian Army officer commanding the Junior Rangers in Ontario. “And the important thing is they had a good time and I am sure they have learned a lot from the experience.”
The competition was held at Canadian Forces Base Valcartier, near Quebec City, and involved 65 of the top Junior Ranger shooters in Canada. The Junior Ranger program is a culturally appropriate Canadian Army program for boys and girls aged 12 to 18 in remote and isolated communities across the Canadian North.
Most of the 10 Ontario shooters were from Lac Seul First Nation, near Sioux Lookout, with two more from Fort Severn and Thunder Bay. For four of them the flight to Quebec City was their first experience in a plane. None of them had been to Quebec before.
“They had a fabulous time,” Captain McNeil said. “They met other Junior Rangers from across the country. It was a great experience for them, seeing and doing things they’d never have been able to do otherwise. It was more of a social and learning experience for our Junior Rangers. The shooting was secondary. They were able to see a part of Canada they’d never seen before and experience another culture.”
They visited a sugar shack to see how maple syrup is made, visited Old Quebec, and learned a few phrases of French
“I really enjoyed myself,” said Ian Kakekaspan, 18, of Fort Severn, who is attending high school in Sioux Lookout. “I shot pretty good. It’s my first time in Quebec and everything here is fun. It’s quite an experience being on a military base, seeing soldiers marching everywhere. I’ve heard lots of French spoken around me and I hear a lot of other languages spoken by Junior Rangers from other parts of Canada.”
For Charlize Gray, 15, of Lac Seul, everything was “cool and fun.”
The Junior Rangers competed with Daisy air rifles on a 10-metre range at a variety of targets using an electronic system that allowed them to see exactly where their shots were landing in real time.
The shooters were, from Lac Seul - Terrance Angeconeb, 14; Daniel Bottle, 16; Charlize Gray, 15; Troy Ningewance, 17; River Southwind, 14; Summer Southwind, 13; Jakob Thivierge, 17; Reilly Thivierge, 14 – plus; Ian Kakekaspan, 18, from Fort Severn, and Jayden Mgashazi, 14; from Thunder Bay.
(Sergeant Peter Moon is the public affairs ranger for the 3rd Canadian Ranger Patrol Group at Canadian Forces Base Borden.) 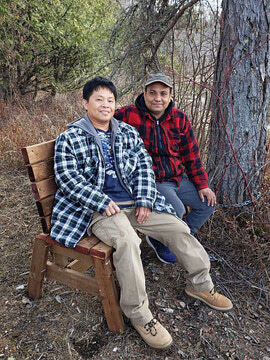 Here is a photo of four new benches that Friends of Cedar Bay installed on the Cedar Bay trail recently.