Some local outfitters saw increase in bookings in 2021

Loosening border restrictions have not translated into the business boom local outfitters might have been hoping for, but some have been seeing an increase in visitors from the U.S. over previous years.

The Canadian government began to allow fully vaccinated residents of the United States to enter Canada for discretionary travel on August 9. This allowed some local outfitters to capitalize on an influx of visitors for the last half of summer and the fall season.

As Jackie Duhamel of Anderson’s Lodge explained, “The easing of the border restrictions has translated into actual business that we could accommodate for fishing into the later part of the summer and into the fall.  We market our fishing packages until the end of September and into early October prior to our moose hunt and like a normal season we are reserved with 95 percent American fishing business.”

Not everyone has seen a traffic increase, however. Lars Ohman runs Knobby’s Fly-in Lodge and Outpost out of Sioux Lookout. Ohman stated, “All our hunting groups from the USA cancelled their trips this year, they couldn’t meet the requirements to cross the border.”

Some other outfitters are reporting a mixed bag as far as traffic flow from south of the border. John Hall of Red Pine Lodge stated, “We don’t have any moose tags so no hunters for us. As the border opened, we had the hard-core fishermen work through the requirements to get up here, but a lot of groups could not or would not, as they were unvaccinated or not wanting to jump through all the Government’s hoops. Numbers in bookings are the same going into next year with a few new Canadian groups now. We will have to see if we still have the vaccine requirements at the border as that will be the issue for the unvaccinated getting in.”

Cam Barnes of River Edge Outfitters had this to say of this year’s bookings, “A lot of people from the States called earlier before the border opened and talked about coming for a late season trip as soon as the border opened. When the border did open, I don’t think they were all prepared for the requirements and we only saw about 50 percent of those that had discussed coming. Some to be sure could not come due to family and health issues but the majority I believe were not vaccinated or did not want to go through the hassle of the requirements. So, we only had a few groups come through from the States for fishing.” Barnes went on to add, “On the hunting side of things, we were able to get our moose hunters through this fall and clear up one group from those that have been booked for the last few years. On the bright side the fishermen from the States have continued to roll over their times booked for 2022 and although we don’t know what the requirements will be for both people coming into Canada or our protocol for housing them, there seems to be a continued interest to come to Sioux Lookout to fish and enjoy our area.” Barnes finished by saying, “We had zero business from the U.S. last year. I think we had two groups last year from Canada. The ten groups we had this year made us ‘up’ from last year. I think we have had about three groups from Canada this year and about six or seven from the States. So, you can see the dependency on the U.S. when the border opened late August and it was still over twice the number of total guests for the year. Ninety-eight percent of our clients are (from the) U.S.

Lee Edwardson operates Pickeral Arm Camp off of Highway 72. As Edwardson explained, “When they opened the border August 9th it helped a lot.  We still had several groups come up and enjoy their vacations.  The restrictions made for a lot of work, and some groups stayed away due to that, but overall people did what they had to do to get across the border. If the border remains open next summer, it will be great for our business for sure.”

Another factor in returning business may be changes to moose hunting regulations over the past two years. As Morgan Kerekes, Media and Services Advisor for the Ministry of Northern Development, Mines, Natural Resources and Forestry states, “Ontario has made a number of significant changes to moose hunting regulations over the past two years as part of the Moose Management Review. The changes were made after extensive engagement and consultation with moose hunters and stakeholders. For 2021, this included a new points-based allocation for resident moose hunters, changes to moose tag types and the harvest management system, moose license fee changes and some additional minor regulatory changes.” Some changes implemented directly affect hunters from the U.S. as Kerekes went on to explain, “Notable 2021 changes relevant to non-resident moose hunters (e.g., U.S. citizens) include: New moose tag fees (similar to resident hunters). These fees are paid to the ministry and reflect hunter demand and ensure continued support for the management of this valuable resource.”

Finally, Kerekes notes, “Non-residents can now only acquire their own tag to hunt moose by purchasing a hunt from a tourist outfitter. A non-resident who is an immediate relative of an Ontario resident who holds a moose tag may purchase a non-resident moose hunting licence to party hunt with their relative on their tag during an open non-resident season.” 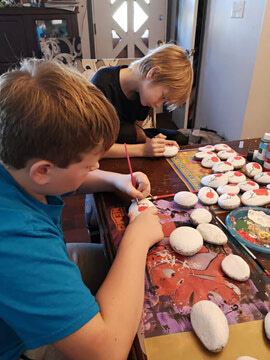 Having raised $1705 last year for the Sioux Lookout Legion s Poppy Campaign, the McCord family of Sioux Lookout are once again rolling up their sleeves to support local veterans...