“Everyone had a good time. There were no mishaps, and I don’t think anyone froze. There were a lot of smiles,” said event co-coordinator Mike Starratt.

The ride was initially planned to go from the Ojibway Power Toboggan Association (OPTA) clubhouse on Abram Lake Road to Pizza Hut in Dryden and back but, due to extreme cold weather, had a last minute switch up that shortened the route. Riders got to enjoy a shorter trip that included stops in Hudson and on top of Sioux Mountain.

“I want to thank Lynda Scott in Hudson because she was our warm-up spot, and it was a last minute thing. She let 38 of us into her shop for tea, coffee, and washrooms,” said Starratt.

“It was memorable in the fact that it was a last minute switch up…It all went off without a hitch. Thank you to Pizza Hut in Dryden as well because they were ready for us, but I cancelled. Next year, maybe, we’ll try and go back there,” he continued.

The annual ride welcomes riders from all across the region including Sioux Lookout, Hudson, Lac Seul, Red Lake, Dryden, Winnipeg, and Vermilion Bay.

For rider Gwen Norkus, who is originally from Hudson and moved down south at an early age, the trails and atmosphere throughout the ride were great.

“The trails were amazing. You don’t see those trails down in southern Ontario. Not at all,” she said.

“They’re so friendly. It’s like travelling with family. Even people I don’t even know, they’re so nice. It’s very welcoming, and I would invite anybody from anywhere to come and experience this,” she furthered.

Other riders echoed a similar enjoyment.

“It was good. I get why they changed it up being as cold as it was…It was the first time doing that loop for me, so I was pretty excited about it,” said Sioux Lookout resident James Thompson.

“The trail was well maintained… It was good. It’s a good little ride to just get out on the sled for an afternoon,” shared Sioux Lookout resident Andrew Jarmain. 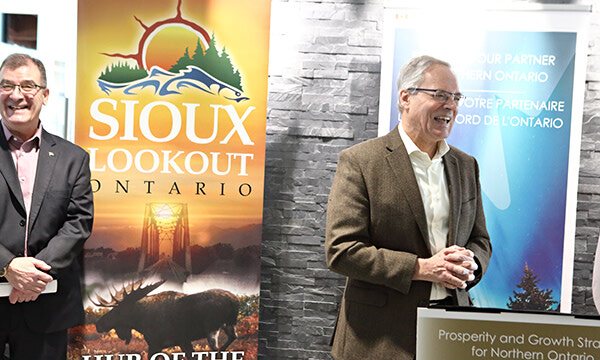 Sioux Lookout s newly renovated airport terminal building will increase passenger services, has created new job opportunities, and will help the community further expand its role as Hub of North according to dignitaries in attendance for the official...