More than 400 students went through the Sioux North High School (SNHS) cafetorium last week during a Mental Wellness Fair, which was organized mainly by SNHS students.

The idea for the fair was sparked during an in-class demonstration at the school.

“We created a mental wellness jar and then we said to put the name in of someone you know that might have, or had, mental illness issues. It was a visual reminder and we probably had around 200 names in there, which was confidential of course… There are hundreds of people that we know ourselves, just our class of 25, in terms of helping understand that mental health is an important issue, so we decided to organize the mental wellness fair. The students have been great and we had been working on it for around a month,” explained Trina Campbell, who is a guidance counsellor and teaches the dynamics of human relations grade 11 class at SNHS.

“We researched different organizations that could help each student in every problem they have so that’s why we did this,” said grade 11 SNHS student Junelyn Lutria.

When asked about the level of participation and potential positive impact throughout the fair, both students and staff shared their excitement.

“It makes me feel happy because, with all these resources that students can take, they might be going through stuff that they don’t want to speak about and they have a lot of resources to help,” said Joshua Meekis, a grade 12 SNHS student.

“It feels really nice because we worked very hard on the stuff that we made and did hard research. It just feels nice that students can feel better because of what we did,” said Lutria.

“What I’m amazed about is we probably have given away around 1000 individual resources today, so I’m surprised at the hundreds and hundreds of resources that kids have taken with them. That way it’s anonymous and you just take what you need without having to put up your hand and advertise what you need help with, so it’s awesome,” Campbell concluded.

Students and staff were happy to share that they plan on making the fair an annual event at the school. 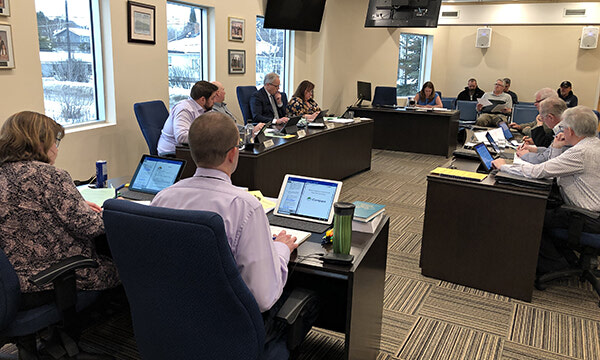 Sioux Lookout Municipal Council has given new direction to Municipal staff for what they would like to see the residential property class general tax rate come in at for this year.