The Sioux Lookout Golf and Curling Club was a busy place on Sept. 22 as Sioux North High School hosted the second of three tournaments being held across the region to to decide the Northwestern Ontario Secondary Schools Athletics Association (NWOSSAA) champions.
There were five schools involved in the tournament with participants representing Fort Francis High School (FF), St. Thomas Aquinas High School (TA), Beaver Brae Secondary School, Dryden High School, and host Sioux North High School. Sixty-three players competed in the 18-hole tournament in boy’s and girl’s divisions.
In the boy’s division, Fort Frances team 2 took first place, Fort Frances team 1 took second place, and TA team 1 took third place.
The best boy’s individual score, 79, was shot by Fort Frances player Kade Oster. Nate Bachynski of DHS had the second best individuals score – 80. Carson Maffey of TA also shot 80.
Fort Frances High School had the only girl’s team in the tournament. The best girl’s individual scores were: first place - Maddy Bliss – 95. Second place - Logan MacPherson – 97. Third - Marlee Bliss – 103.
Golf coaches for Sioux North High School, Matt Gain and Janine Lavoie, brought out eight boys and one girl to compete in the tournament. Gain commented on this season’s progress sharing, “I feel like maybe we might not be the top team this year but looking forward to the future, I think in two years or so we are going to be right in there for the medals, this year is kind of like a rebuild.”
As Sioux North High School prepares to play the third tournament in Fort Francis, where the top three teams move onto the next stage (which is what) in Thunder Bay, Gain continued, “there is lots of potential moving forward, we have a few grade nines that need a bit of fine tuning, it’s a bright future for us for sure, we need to get a few more girls, we have one girl and it’s nice to get a few more out, it’s a promising future for our team.”
Sioux North High School students commented on how the day went. Zac Lance, Grade 12, shared, “First year playing. The players were good, I shot not really well. I think some of the younger guys did pretty well this tournament.”
Jessica MacMillan, Grade 10, shared, “I’m the only girl from our school so it’s kind of scary being only with girls from other schools. I shot in the 130s. It’s my first time playing in a tournament and it’s my second time playing this season. It’s been a couple practices, but the weather hasn’t been the best.” Grade 12 student Talon Zoccole, who just began golfing this year, was asked about the competition at the tournament and he shared, “It looked pretty good out there. Fort Francis played well today.” 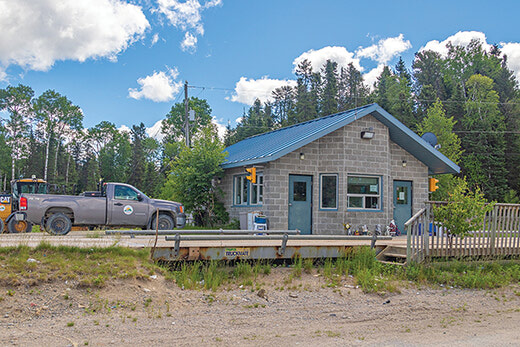 Fees for waste disposal at the Hidden Lake Landfill will be increasing for Sioux Lookout residents...