Good afternoon and welcome parents and family, staff, community members, and our school drum, Makwa, to the first Sioux North High School graduation ceremony.
And to the graduates of 2019: First off, thank you for the honour of speaking on your behalf. I would like to start by saying that you all have the power to change the world. Now before you roll your eyes, believe me, I know you have all heard those exact words about fourteen-thousand times before, but it’s true. You have the power to change the world, and you already have. Every time you smiled at someone (who maybe didn’t smile back), every time you gave a nice compliment to someone who needed it, helped your friend study for their dreaded biology test, or donated a box of Kraft Dinner to a Christmas hamper, you made a difference. Members of our graduating class helped to raise over $20,000 for cancer research, we’ve pie’d a lot of teachers in their faces for charity, and we’ve decked out in green and gold to rally around our Warriors teams, win or lose. The class of 2019 has made a difference not only in our school, but in Sioux Lookout, and beyond. I’ve added it up, and together, we have completed over 5000 hours of volunteer work!
In addition to these great accomplishments, many of us share the classic high school memories of freezing our toes off on Outdoor Ed. quinzhee trips, the fear of messing up Mr. Osmond’s perfect order of collecting multiplication quizzes, and everyone’s favourite: being guinea pigs for the online version of the OSSLT. We have sat back to listen to math and science teachers argue about who is smarter, either loved or hated running the beep test, and survived the move to a new building in the middle of the school year. We got to say goodbye to portables, goodbye to dusty chalkboards, and goodbye to freezing cold classes in the lunchroom. Athletes in our graduating class have competed in nine OFSAAs and there have been even more NorWOSSA and NWOSSAA successes.
But we didn’t get here on our own. On behalf of the graduating class, I would like to thank several people who have helped us succeed throughout high school, and who have made an impact on our lives. To all the Education Authorities, who have provided students from Northern First Nations communities with an opportunity to attend high school and to build relationships with people in Sioux Lookout. To the grad coaches of the 4 Directions program for providing support and kindness to those who are far away from home. To our teachers and staff who have worked tirelessly to provide opportunities for us to reach our goals. To our coaches who have always encouraged us to work hard and to never give up on our dreams. To our parents and guardians who have stuck by us, providing support when we needed it most and instilling values that we will carry with us throughout our lives. And finally, to our peers for supporting one another through everything over the last four years.
Four years ago, we marched into QEDHS like we owned the place to join an incredible legacy. Today, we become the first graduates of Sioux North High School and we will create our own legacy, establishing the path that hundreds of seventeen-year-old Northwest Ontarians will follow after we leave this chapter of our lives. No matter what direction your life decides to take you, whether you will be working, moving away to go to school, starting a business, travelling, returning to home communities to spend time with family, raising children, volunteering, or focusing on something else next year, I challenge you to keep finding ways to make our world a better place.
As Michael Redhead Champagne put it, “Young people are often referred to as ‘leaders of tomorrow’. We don’t got time for that: you need to be leaders of today.”
Congratulations, Class of 2019, and keep changing the world in your own little ways. 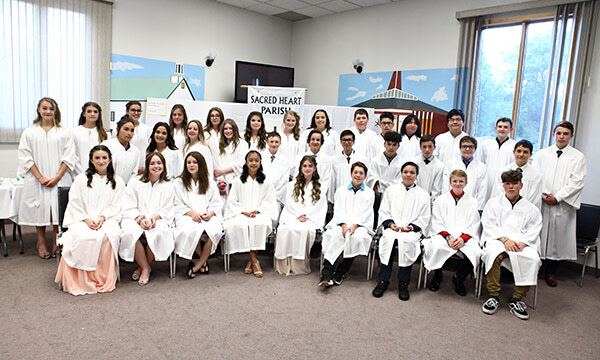