“It was lots of fun. It was probably one of the best trips I’ve been on in a long time…Everybody was so set on catching fish. One of our little guys sat down and had a fish on within two minutes, and that was it. From there, everybody was bent on getting a big fish. It was great,” shared SMPS family support lead and leadership teacher Sharon Dumonski.

The trip was made possible through collaboration between Project Sunset programming and Leadership class curriculum at SMPS, which has a focus on getting the kids out in the great outdoors.

“We had Project Sunset run at Sioux Mountain for about a year and a half, and it’s an OPP (Ontario Provincial Police) initiative. Our program coordinator became an OPP officer and he was just stationed here in Sioux Lookout a couple weeks ago… Some of us at the school were waiting for the program to come back and decided to pitch a sustainability plan to the OPP about taking on the program ourselves. My husband Steve (Dumonski) is a teacher and hockey coach at the school as well and we, together, teach the leadership classes, so we have students from grades five to eight, about 80 of them, that take on leadership roles within the school and the community. A lot of the Project Sunset mandates sort of fit what we were trying to do through leadership, so the OPP was willing to support us. They’ve given us some sponsorships through Project Sunset to continue to do initiatives and programming,” Dumonski explained.

“It’s all adventure-based and land-based activities. We really try to tie in with traditional teachings and take advantage of where we live. It’s the perfect location to do all this stuff,” she concluded. 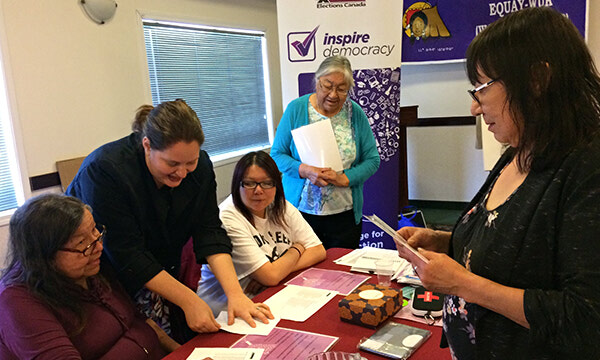