If you looked closely during this year’s Blueberry Festival, you may have spotted little rubber ducks in unusual places around Sioux Lookout and Hudson.

Drayton Cash and Carry Owner Dorothy Broderick explained, “I had bought a bundle of rubber ducks to donate to the Skating Club’s Rubber Ducky Race to replace the dozen or so ducks that had gone missing or lost their buoyancy over the past at least a decade or two of them being raced. Of the large bundle, I had 73 ducks left once I replaced the missing and left some spare.”

This gave her an idea for another Blueberry Festival event in which she hid the leftover rubber ducks in both Sioux Lookout and Hudson.

“A low key, easy event for all ages to participate in. Finders could turn in the ducks, keep them, or leave them for others to find. Anyone finding a duck could tell me where they found it and get an entry into a draw for a candy bag and freezie. Some of the ducks had hearts badly drawn on them and were just a little love for the finder. Some had ice cream cones badly drawn on them. Those could be brought in and traded for a cone. One had a badly drawn bicycle on it. That one would be the winner of a really nice second hand bicycle I bought that didn’t fit my kids. Win-win! No more storing ducks and a bicycle I couldn’t use. More fun for Blueberry Festival!”

Six-year-old Bronson Greig was delighted to discover the rubber duck with the bicycle drawn upon it; informing that the event was just one of many Blueberry Festival events he took part in this year. 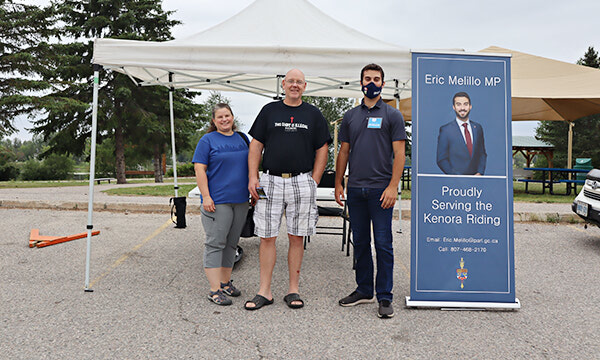 A short but successful Home, Craft and Trade Show