Slo-Pitch swings back into action this summer

Two slo-pitch enthusiasts, Jeremy Caul and Kayla Beck, have worked out an opportunity to continue offering slo-pitch to the community this year until September 3, and invite individuals to join the game twice a week.

“It has been since 2019 that we had a full season. Obviously, since last year we didn’t have a league…and normally we’re registered and playing by beginning of June, so, being halfway through the season already, we had a feeling that we might have a hard time getting registered teams. So, we kind of just put a feeler out there to see what people were thinking, if there was any interest in forming a league this year and unfortunately we didn’t have quite the response that we thought. We only had four or five teams express interest in a league, and that is not quite enough to run a full season. So, what we offered was that the league had some funds left over from tournaments past, and what we have decided to do is just pay for the field…and encourage people to come out. So, if you have a team, bring them out, and the field is yours,” said Caul.

Caul said, “For individuals that are looking to play or looking to join a team, this is an opportunity to meet new people and join a team, and hopefully we can get some folks interested again for a full season next year.” He has been working in collaboration with Beck to make this option available. “Myself and Kayla volunteered to try and get it going this year, knowing that no-one else had spoken up and tried to get it going,” said Caul.

Additionally, they are hoping to call for participation and conduct small tournaments around the end of August. Caul said that four to five teams are sufficient to run a tournament, and with adequate interest, they could get a few games going. He added that typically their past seasons would consists of eight to ten teams and two leagues, one for elite players and the other for those playing as leisure.

Interested individuals can reach out to Jeremy Caul or Kayla Beck through their Facebook accounts. Caul said that they would also be posting further details to local Facebook groups as they become available. The games will be held at the municipal  ball diamonds on Third Avenue on Mondays and Thursdays between 7 p.m. and 10 p.m.

Encouraging more people to get outdoors, and considering that this would be a short season, Caul added that the municipality has also offered them a discount on the cost of using the field. He said, “The fields are available, they are empty otherwise. So, we might as well make good use of them. There are lots of people that wan to toss a ball around.”

“We don’t want people to feel obligated that they have to bring money to play,” said Caul. He explained that while they would welcome a general payment of $20 per team play, or $2 per game for an individual, that they are not obliged to do so.

The opening day of July 12 wasn’t bad, said Caul. “I know it was a very short notice. And we had 12 folks show up and we were able to put on, what we call half game, where we have a full field and a few batters, and if you get out, you go into the field and everybody rotates positions. So, it’s kind of a good way to learn the different positions and keep moving and keep engaging so things don’t get boring in the absence of a full team,” he added.

While game equipment will be available on site, Caul advises individuals to bring their own gloves. He added that social distancing is being encouraged and public health measures still have to be followed.

Caul said that this is not only a good reason to get outside for some activity, but also an opportunity for some safe social interaction. “I am just looking forward to more people coming back to the community and engaging in the sport and having fun. Next year would be nice to have a full league. So, hopefully this keeps the interest going.” 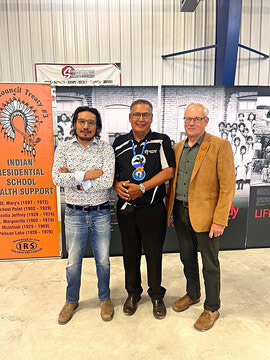 In a statement he released last Friday, Kiiwetinoong MPP Sol Mamakwa expressed his solidarity with the people of Tk emlúps te Secwe pemc First Nation and also commented on the Bring Our Children Home gathering held on July 14...