The Sioux Lookout Golf and Curling Club (SLGCC) enjoyed one of its last events of the summer season with glow golfing last Friday. The Glow Ball event, which got underway with a shotgun start at 8 p.m., was a leisurely event that welcomed everyone. Fifteen teams of four participated.
The event was a best ball 9-hole tournament. The course was lined with glow in the dark sticks and each participant was given a glow in the dark ball.
“Glow Ball used to be run by Crime Stoppers, but hasn’t run in a few years, so the club has decided to take it on,” said SLGCC Manager Sheila Suprovich. She added that COVID-19 safety guidelines were followed at all times, “with marshals out on the course ensuring social distancing.”
Team Hoey won the event with a score of 34. The team included Ryan Dasno, Marley Quince, Kristen Hoey, and Matt Monkman.
Priscilla Nayotchekeesick and Marley Quince took home longest drive prizes from sitting on a chair.
Prizes were donated by Sioux Lookout Home Hardware.
The Golf Facilities in Canada 2017, a report of golf facilities and development, has created the country’s definitive report on golf facilities and golf projects. It states that Ontario has 805 facilities, which is 35 percent of the country’s total supply. 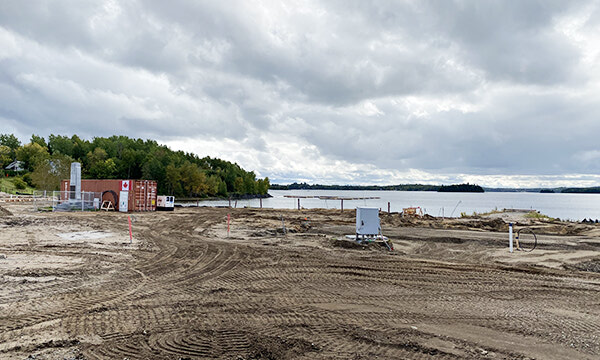 The Municipality of Sioux Lookout is on track to complete its Waterfront Development Project at Farlinger Park (the town beach) by Nov. 30.