The Sioux Lookout Golf and Curling Club (SLGCC) conducted their Iron Man event on July 10, one of its long-standing golfing tournaments that ran at full capacity this year with the participation of 28 teams.

SLGCC Manager Sheila Suprovich shared, “This is a tournament that the club has typically run every year. While most teams were local we did have a few teams come from Kenora and Dryden and it’s always great to get golfers who want to travel to our course.” She added, “It was a long day totaling around 8.5 hours to complete all 27 holes. It is a tough tournament and I give credit to everyone who enters it.”

In teams of two, the golfers participated in three rounds of nine holes.

A participant at the event, Ronan Raspado said, “It was a pretty good day. It’s good that it wasn’t raining; it’s a lot easier to play. And all the players are having fun right now. The course is in a good shape after the storm and they have fixed it, so it was pretty good to play today. It’s a perfect day.” He added, “For me, I’m still a beginner in golf, so I just want to get more experience in a tournament and get better at it.”

Another participant Gary Skead, said, “It’s really a nice event to be out here and play different course. We’re from Kenora, and it’s nice to be here.”

“I’m enjoying it. I’m just having a good time. Perfect golf weather; not hot, not cold,” said Gene Duncan, another participant who often enjoys his time golfing with his friends and family at the club.

The event also offered a skins component for $20/team, where teams competed for the best overall score on a hole. First place skins winner was the team of Rene Nadeau and Hubert Beauclair, and second place was presented to the team of Ashley Nate and Mitchell Spence. Both teams took home $172.

“Overall it was really successful and all the golfers had a great time. It is a tournament that will continue to run and grow at the course,” shared Suprovich. 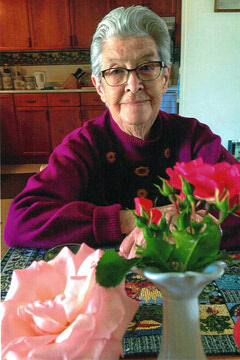 In loving memory of Barbara (Babs) Featherstone age 88 who passed away June 7th 2021 at the Mountain View Living Care Facility, Comox B.C. with family by her side...