Members of the Sioux Lookout Golf and Curling Club’s (SLGCC) board of directors are inviting the community to visit the club, learn what it has to offer, and help keep golf and curling alive in the community.

“A lot of people don’t think this place is open on a regular basis. We’re trying to get it out there to let people know it’s not just for people who are members of the club, it’s for everybody,” said club president Dave Kulchyski. “Our doors are open to everyone in town to come up here and use the facility,” he added.

Currently, curling is made possible at the club through the efforts of a handful of volunteers.

“We feel, as a group of volunteers, that we’ve got to keep it going,” shared club board member Knowles McGill.

The club is looking for staff for the upcoming golf season, which may get underway as early as mid-May, depending on the weather.

Last Friday evening, the club hosted a fundraising social and a windup for its curling leagues.

The golf and curling club was packed for the event, which Kulchyski said was wonderful to see, as it was a sight he said he hadn’t seen in some time.

The evening was sponsored by Volt Entertainment, Lake of the Wood Brew Co., The Hub Transit, Pelican Sandwich Co. and Sysco.

Board member JoAnne Van Horne stated, “This was a new idea we’d been talking about for a number of years and finally made it happen… it turned out great!”

As the curling season wraps up, Van Horne said the club is still hoping to receive ongoing support from the community for a critical piece of equipment, an electrical panel, that needs replacing.

“The donations have started to slow down a bit. We’re just under $10,000 right now. We need $30,000 more. We’re going to go after a Trillium Grant when the application becomes available,” she informed.

Van Horne said the project has been registered with Sport4Ontario (National Sports Trust Fund), making it possible for anyone or any business making a donation to receive a tax receipt.

She said donations can be made in one of the following ways:

Online by credit card at the following website: www.sport4ontario.ca/project-114-sioux-lookout-golf-and-curling-club. Ensure that you have chosen our project #114.

Complete the donation form, attach your cheque and either mail it to the SLGCC at 87 Third Avenue, Sioux Lookout, ON, P8T 1G7, or contact her and she will arrange pick up. She will then submit your donation for you. Donation forms can be found at the Club on the bulletin board by the bar or by contacting her at 737-1419 (home#) or 738-4461 (cell# or text).

The club enjoyed a busy eight week youth curling season. Board members informed that learn to curl and learn to golf opportunities are traditionally offered by the club for anyone interested in trying out either sport.

“Currently, we have the special on, like we do every year, that if you buy your membership before the end of April, it is the same price as last year,” Kulchyski reminded as golf season approaches.

The Bearskin Airlines Charity Golf Classic as well as the Blueberry opens are all upcoming highlights of the golf season he said, along with weekly men’s and women’s golf twilights.

Board member Natalie Popovic added people from around the world have complimented the club on the quality and level of difficulty its nine hole course offers.

Additionally, the club offers a restaurant, a patio in the summer, and rents out space for functions and events.

People can stay up to date with club happenings through their Facebook page @SiouxLookoutGolfandCurlingClub. 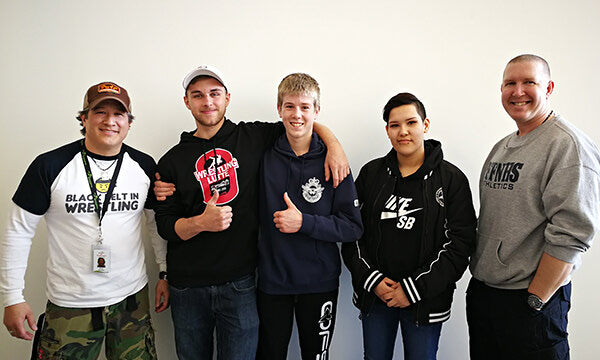 Both Pelican Falls First Nations High School (PFFNHS) and Sioux North High School (SNHS) were represented at OFSAA during the wrestling provincials in Ottawa, Ontario from March 4 to 6.