Sioux Lookout First Nations Health Authority (SLFNHA) celebrated National Indigenous Peoples Day (June 21) with the Grand Opening and sign unveiling for the Omamun Ziibiis (Vermillion River in Anishinabe) Cultural Centre.
The centre is designed to offer visitors utilizing SLFNHA services a place to connect with the outdoors while in Sioux Lookout for short or long term stays. The location, on the site of the former Rivers Edge Outfitters on Highway 664, allows access to both land-based and water-based activities.
In a media release issued June 22, SLFNHA stated, in part, “SLFNHA is proud to present this newly renovated and accessible place for traditional healing for the First Nations it serves, on National Indigenous Peoples Day. The Health Authority also acknowledges the centre is situated on the traditional territory of Lac Seul First Nation, signatory to Treaty 3. Miigwetch to all that joined to celebrate this new step for SLFNHA on National Indigenous Peoples Day.”
On hand for the Grand Opening was James Morris, CEO and President of SLFNHA. As Morris explained, “We bought this camp to do activities with the clients we work with. These are young people, who go through northern counseling, and need land-based treatment. We have the land here, and the river, the water, is very important. And also, we wanted to include activities for some of the clients and patients that come down and stay at the hostel rather than just stay all day in their room. We want to do activities like arts, crafts, painting. So, they’ll be able to do those things rather than just sitting in their room. And we will also be able to use this spot for ceremonies, and other events.”
Morris also commented, “We’re excited to present the new Omamun Ziibiis Cultural Centre, a location that provides traditional and accessible health services connected to the land and the people we serve. This is another step in our organization’s move toward taking control of our own health care. It is important that our people find healing and recovery while having access to the land and this camp helps in that way. Today we are happy to share that the camp is officially open and will be functioning for the benefit of our people.”
Also on hand to celebrate the opening was Sioux Lookout Mayor Doug Lawrance, who noted, “It’s a privilege to be part of the opening of Omamun Ziibiis. The camp, situated on the traditional territory of Lac Seul First Nation, will provide a naturally beautiful setting for people coming to Sioux Lookout for medical needs. The ability for SLFNHA to provide traditional and land-based programming at this camp will be supportive for clients. We congratulate SLFNHA on the grand opening of the Omamun Ziibiis Cultural Centre.”
Lawrance also commented, “The setting here and the type of facility can only be beneficial for people who are coming to Sioux lookout or living in Sioux Lookout, for healing or for recovery from whatever has brought them here. Just the natural setting itself is relaxing and beneficial, and then the ability to be able to avail themselves of the traditional practices on the land is obviously beneficial. Congratulations to SLFNA, it’s great to see them investing in the community like this and helping people.”
Lac Seul First Nation Chief Clifford Bull, who was also on hand for the centre’s opening and sign unveiling, noted, “I believe the facility will greatly enhance the mental well-being and recovery of the people in our region. Being on the land and close to the water is conducive to healing.” 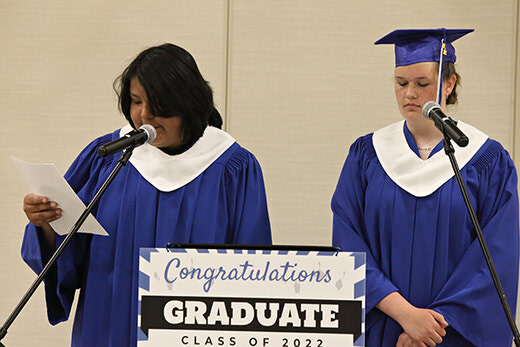 Good afternoon parents, guardians, staff, students, community members and distinguished guests. Welcome to the 2022 Grade 8 graduation. Where we celebrate opening a new door and chapter in our lives as students as a whole...