The community, once part of Mishkeegogamang First Nation, was established near Bamaji Lake in the 1930s.

A press release issued by Kenora MP Bob Nault on February 14 informed, “In 1985, Slate Falls Nation was recognized as a separate band under the Indian Act. In 1991, Canada pursuant to the Six Nishnawbe Aski Nations Agreement with Ontario and Keewaywin, Wawakapewin, Saugeen, McDowell Lake, Aroland and Slate Falls Nations, committed to creating reserves for each First Nation.”

The release went on to explain, “A federal Order in Council, which was signed on December 14, 2018, set apart 6,599.176 hectares (16,306.919 acres) of land, including the mines and minerals for the use and benefit of Slate Falls Nation under Canada’s Additions to Reserves/New Reserves Policy. With the creation of the reserve, Slate Falls Nation can pursue its vision for its members and further develop economic opportunities.’

“I want to congratulate the leadership and community of Slate Falls Nation on the creation of their Reserve,” stated Nault. “It is truly a momentous day – one that will be remembered for generations to come.”

“I recall the day I signed the Nishnawbe Aski Nations Agreement in 1991 that set this reserve creation in motion. It has been a long process but I – we never gave up. I also want to acknowledge all past and present leadership who played a role in seeing this through – it’s truly a great day for the Slate Falls Nation,” commented Slate Falls Nation Chief Lorraine Crane.

“We are pleased to congratulate Chief Crane and her Council for their determination to reclaim their home over nearly three decades of advocacy and negotiations. This is a historic achievement that all community members can be proud of,” said Nishnawbe Aski Nation Grand Chief Alvin Fiddler on behalf of the NAN Executive Council. “Achieving reserve status took a tremendous amount of work by community leaders, representatives of many other organizations and various levels of government. We acknowledge the efforts and persistence of everyone who assisted. This is a major accomplishment and a milestone for the people of Slate Falls.”

“Congratulations to Chief Lorraine Crane and the community of Slate Falls Nation on this historic day. Future generations will benefit from the hard work of everyone who helped to make the Slate Falls Nation reserve a reality. Our government is proud to support you in these efforts,” concluded Minister of Indigenous Services Seamus O’Regan.

According to NAN, “The community celebrated the opening of a new water treatment plant in March 2018, part of a $11.6 million-dollar project to provide safe drinking water and firefighting infrastructure such as water pumps and hydrants.”

Slate Falls Nation is located approximately 120 kilometres north of Sioux Lookout. It is accessible by all season road and plane. 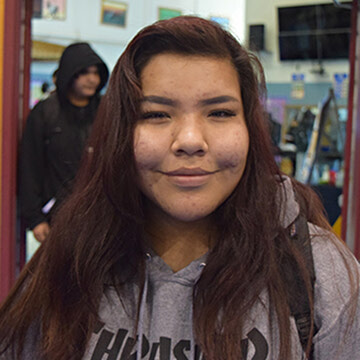 Question of the week: Pelican Falls First Nations High School hosted its annual career fair on February 14. Students were asked if they had a career in mind or one they wanted to learn more about.