Slate Falls Airways got into the Blueberry Festival spirit this year with two events which both proved quite popular.

On August 1, over the course of the afternoon, nearly 350 people experienced the thrill of a floatplane ride and took an aerial excursion over Sioux Lookout through the Slate Falls Air Floatplane Rides event, a long-time Blueberry Festival stable.

Slate Falls Airways Owner Matt Cairns said, “It was a bit of a challenge this year. After losing several of the airplanes in the storm in June, we had a reduced fleet to deal with, so the wait times were a little bit longer than we’re used to seeing, but people were good sports…and we had nice weather. Everyone had a good time.”

On August 7 people flocked to the MNR Beach for the Slate Falls Air Balloon Drop.

Approximately 80 balloons, each with a prize, were dropped by one of the company’s floatplanes, as it made multiples passes over the beach.

This was the third year the event has run, going on hiatus in 2020 due to COVID-19 public health restrictions.

“We were super happy to be able to get back out with the nice weather and huge turnout we had, it’s obvious people were looking forward to it as well,” Cairns said, expressing his thanks to local businesses who donated prizes for the event.

“We’re hoping next year, with DJ Slipper-e and Volt Entertainment to run a much larger event, more of a beach fun day and have more events,” he shared. 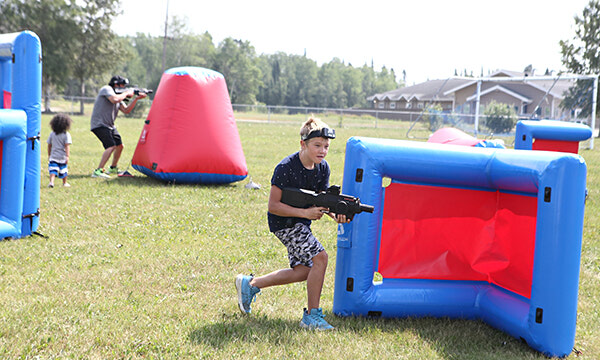 A steady stream of participants took to the former Queen Elizabeth District High School field on July 31 for some fun courtesy of Nomad Mobile Laser Tag.