Sioux Lookout Area Aboriginal Management Board (SLAAMB) held a grand opening for their second duplex, along with a ground breaking ceremony for three upcoming projects, in Hudson last week.

SLAAMB’s Assistant Coordinator, Ziggy Beardy said that the day commemorated two major SLAAMB events. The first celebration was for a grand opening of the second duplex, which was completed by the Carpentry Apprenticeship Training Program trainees on March 31 of this year. The second duplex, along with the one that was built prior to this, are intended to be student residences that are currently housed by the carpentry trainees, however, would also serve as student houses for trainees of any potential new program that SLAAMB may introduce.

The second event of the day was a groundbreaking ceremony for SLAAMB’s upcoming builds. A five-week session for the trainees is already underway, which will prepare the trainees to start building from August 16. The three new building projects are a warehouse/workshop, a garage, and a two-story classroom.

Beardy said that the event went really well, being attended by several dignitaries to congratulate, motivate and support SLAAMB and its trainees for all their hard work. “We had planned it in advance and the dignitaries that came, quite a few showed up and made the event really successful and also some people from town came, and families of the trainees also came…the past instructor and the present instructor was on site as well, and everybody was just happy with how SLAAMB carpentry training is bringing out skilled young people that will help in the future and also once they go back to the communities, they would be more skilled in building houses,” he said.

Marcel Beardy, a third year trainee of the Carpentry Apprenticeship Training Program said, “I feel that it is really great and I feel really privileged to be put on a pedestal like this, because all I’m doing is just my job and what I love to do, and just extra credit for that means a lot to me. I’m looking forward to work a lot more harder with the guys on these new coming up projects.”

Nishnawbe Aski Nation Grand Chief Alvin Fiddler said that this is a big part of giving young people the opportunity to learn and develop their skills in essential trades, to help build the community. Fiddler said, “I think today is a great day. I am really glad to be here, just to be a part of this event, and to see the trainees’ progress to becoming certified carpenters that is something that is so needed in our communities. I am proud of them all, I am proud of SLAAMB, the management and board for supporting them in their journey. I think this is so important…we need to be able to give these opportunities to young people and this is a big part of it, so I’m really glad to be here.” He added, “It’s so important. That’s how we build our communities is having trained and certified workers in the community for carpentry and other trades, that is so key and SLAAMB is fulfilling their mandate by doing this and we need to encourage them to keep up with the work and supporting these trainees get their certification.”

MPP for the Kiiwetinoong riding, Sol Mamakwa, who also attended the event, said, “I think it’s so important that they be part of the solution and we do it in very small steps, unless there is significant funding that is put forward towards First Nations housing, but also the municipal housing. Because, if there is overcrowding in the north, it filters down to the municipalities that are in the northern Ontario. So, we have to work together towards that and whether it’s been municipalities, First Nations. But, it’s certainly moving forward to be able to address this long, outstanding housing crisis. Housing is so important because what’s going to happen is people will start moving back home to their communities and start building up our communities, because people leave for work, people leave for there is a lack of housing, people leave for health, people leave for education, there are different reasons. But, I think there is such a shortage in homes, there is overcrowding, and I think we are going to be able to address that issue.”

Mamakwa said that a few years down the road, “We want to be able to have these communities very abundant with homes and we don’t have multiple families living in these two bedroom, three bedroom homes…we don’t need to live like that.” He added, “I think it’s the hope that they go back and become role models for people, role models for children, role models for youth. If we had our own construction company, if we had our own building supplier for the north…we’d be doing our own work. It would be First Nations thriving rather than outside people coming in, and that’s just what we need.”

With assistance from Keewaytinseh Future Training Corporation (KFTC), this ongoing endeavour by SLAAMB was undertaken two years ago when the build for the first duplex began. After the initial group of 10 trainees graduated through a Construction Craft Worker program conducted in Thunder Bay with Laborers’ International Union of North America (LIUNA) Local 607, they returned to build their very own duplex as a student residence on 8th First Avenue in Hudson, shared Beardy. He added that the work on this first duplex began in late-September of 2019, completing the project by June 2020.

Inspired by this commendable finished project, the trainees undertook to build a second duplex to offer accommodation to a greater number of SLAAMB students. They started work on the second duplex in August of 2020, having completed it by end of March this year, said Beardy. Last week’s ceremony held a grand opening for the second duplex, while sharing their plans for the third phase of building a warehouse/workshop, a garage and a two story classroom, as part of the carpentry program. This will give them an opportunity to experience more upscale and commercial building experience, said Beardy.

“Phase 3 of the Carpentry Apprenticeship Training Program started July 12 with five weeks of classroom training and the actual builds start August 16,” explained Beardy. He anticipates the completion of this third phase by the end of March 2022. These new projects will not only be geared towards trainees for the carpentry program, but will also incorporate potential students for future programs that SLAAMB anticipates to introduce, such as training students to become electricians, plumbers, and welders.

Upon the change of owners for the East Side Cafe in Hudson, which was rented by the carpentry program as storage for tools, supplies and materials, Beardy said that they wanted to proceed with building their own warehouse as soon as possible to house all their equipment. This extra space could also benefit students to get hands on experience on smaller projects, such as building a table. He said that a new garage would help them protect their vehicles from the harsh temperatures. Beardy shared their requirement for a two-story classroom, “We definitely need an on-site learning centre instead of transporting students back and forth from Sioux Lookout everyday, so it will be more convenient if we had training at the Hudson site.” He added, “Everything will just be right there. Just walk out of the apartments and go straight to the classroom, and at the top portion of the classrooms, there will be a fitness centre and a library, lunch room upstairs and the classroom areas will be on the lower level of the building.”

NAN Grand Chief Candidate Derek Fox said, “There is lot of potential for the young people of Nishnawbe Aski Nation, which is where many of these young guys come from…and one of the first things that they learn is you’ve got to work hard to create a life for yourself. We all want a better country, a better city, a better town, better economy, a better society, but first and foremost, the thing that goes through our minds as individuals is that we want to create a life for ourselves, our families and those around us. And for them, they are creating a life, they are providing themselves with tools that they can use to succeed and advance their lives, their families. So, I am proud of them, and as a result of that, they are being role models from people that are watching them.”

Fox said, “Trades in the north…is so crucial and so important because you have something like plumbing, carpentry, even the ability to fix your chainsaw, your boat motor, because when you go up north, there is nothing up there for automotive shops. You need to send your stuff out on the plane. So, there are all kinds of skills that you attain and I think it’s important that they have those skills and the sky is the limit once they do.” He added, “I love seeing the smiles on their faces, I love seeing their success. Given all the social issues in our communities, and especially with COVID, we need to have something positive for them to do and I’m thankful to Ziggy and SLAAMB for creating this opportunity for them to make a life for themselves.”

A carpentry program trainee, Tristan Beardy Korobanik, said that this motivated him to become a better carpenter, and is excited to work on the upcoming projects. Korobanik said, “I feel pretty proud about myself.” He added, “It lets me know that people are paying attention to our work and possible future jobs.”

Kitchenuhmaykoosib Inninuwug First Nation Chief Donnie Morris said that it is vital to prepare for the future, especially under the changed circumstances of COVID. He said, “I really appreciated what I saw, and also the fact that we could contribute to having more buildings…to promote training in all areas of what’s required not just up north, but for people to get more down south too.”

Sioux Lookout Mayor Doug Lawrance said, “I think SLAAMB has been such a positive influence in Sioux Lookout, being here for 30 years and growing. When they needed a space about 10-12 years ago, they bought one of the old retail facilities and converted it into their SLAAMB office and classrooms, and when they needed residences for their students that were coming down, they acquired land and built residences as part of the training program, which is what we have here, so that they can bring more and more students down, and their plans for classroom space and bit of a complex out here. So, it’s a fantastic contribution to the community, and then the trainees will go back to their home communities and contribute there.”

Beardy shared his happiness to see the dedication among SLAAMB trainees to learn and finish their program, while motivating other interested individuals to join the training. He said, “We are very happy to see the students be successful. They really put their minds and hearts to the program. They’ve had no trouble, no occurrences at the camp or with the students and this is our third year and I can say that they are really intent on learning and finishing the program because it will help them in their future careers and just want to encourage others to join SLAAMB for any program, and I know that it will benefit you.” Beardy added, “It has benefitted hundreds of others who come to our training programs and are working and are successful in their careers. So, we just encourage everyone to think about their future and go about pursuing it.” 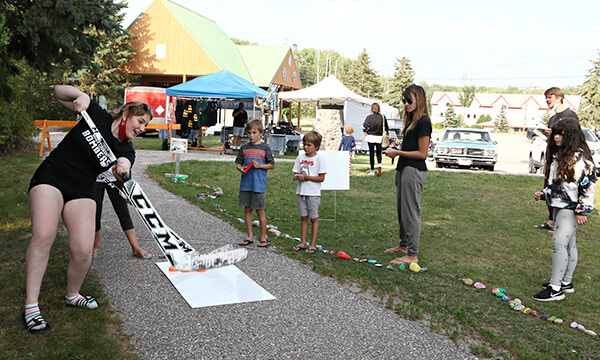 October 23 will be Hockey Day in Sioux Lookout!
The Sioux Lookout Bombers Jr A Hockey Club made the announcement on August 6 during this year s Blueberry Festival, at a meet and greet event they held at the Sioux Lookout Travel Information Centre...