This year’s 9th Annual Bearskin Airlines Skip to Equip Curling Classic saw 120 curlers represent 28 teams at the Sioux Lookout Golf and Curling Club from Nov. 8 to 10.
The women’s curling fundraiser, with the support of the community, raised $80,000 for the Sioux Lookout Meno Ya Win Health Centre (SLMHC) Foundation, which is the highest amount they’ve fundraised in a single year since the events’ inception.
“Skip to Equip will be focusing on raising the funds required to replace all the IV pumps at SLMHC, which will reach the end of their life by 2022. The foundation, with enormous support of Skip to Equip, has taken on the commitment of raising the $250,000 required by 2022,” the SLMHC Foundation shared.
When the $80,000 cheque was revealed in front of the Skip to Equip organizing committee, event participants, and SLMHC Foundation representatives, the Sioux Lookout Golf and Curling Club erupted with cheering, praise, and tears of joy.
“I was standing between two very emotional ladies that were just vibrating with excitement and got teary-eyed instantly. They put a lot of heart into it. There are some ladies who are so dedicated to that fundraising, and it’s emotional for them to see that they’re able to accomplish that year after year,” said Natalie Popovic, Skip to Equip organizing committee member.
“It brought tears. I’m overwhelmed and impressed by the work of the women in this community… The commitment to health care in this community is wonderful,” said Rita Demetzer, SLMHC Foundation representative.
“It was tear-jerking. It’s utterly amazing that this event can raise that kind of money,” said Muriel Anderson, Skip to Equip organizing committee member.
On behalf of Terry Jewell, who is the President of the Sioux Lookout Meno Ya Win Health Centre Foundation, Jackie Duhamel shared, “Congratulations to the Skip to Equip committee on another tremendously successful event. The Health Centre Foundation is truly honoured to be the recipient of your fundraising efforts... We look forward to our continued partnerships with Skip to Equip, and to be able to provide quality health care here in Sioux Lookout.”
“I really want to congratulate you for this marvelous success… I’m beyond words. It’s such a creative endeavour that you’ve been a part of,” said Councillor Joyce Timpson on behalf of the Sioux Lookout Municipal Council.
“We’ve been the title sponsor of the Bearskin Airlines Skip to Equip Curling Classic since inception, and we are proud to see the milestones that organizers have achieved. Congratulations to the volunteers and participants that made this event a reality. The money that has been raised with this event will enhance the quality of health care in Sioux Lookout for many years to come,” said Sharon Nichol, representing title sponsor Bearskin Airlines.
Laurel Hakala, Chair of the Skip to Equip organizing committee, shared the event has raised approximately $625,000 to date.
With 21 out of 25 skins, the team of Julia Palumbo, Sara Cosco, Samantha Donaldson, and Melissa Fortin finished in first place this year.
“It’s always really, really, fun,” said Julia Palumbo.
This year’s event featured a commercials theme, and teams were encouraged to dress accordingly with prizes awarded to best dressed teams.
Over the course of the weekend, having fun is emphasized during the event. This year’s event saw an increase in teams and new curlers, which was exciting for organizers and other participants to see.
“We were really excited as a committee to see 28 teams this year. We’ve been as low as 22 so to get 28 teams back was exciting right off the hop. The committee gets energized for the weekend, and it’s always a mystery how much is really going to get raised in the end,” said Popovic.
“To have people become interested in curling and recognize that it’s a fun sport, they can have a good time, get some exercise, meet new people, and have a sense of community is a good thing,” said Demetzer.
“I think it’s a great opportunity because it’s all different levels of curlers. We get people who have never curled before, some people who have curled for many years, and anybody can win it because we’re all divided into pools and it’s based on winning an end, or a skin, so we’ve had lots of different winners over the years,” said Hakala.
Next year’s event will be a milestone for Skip to Equip, officially marking a decade of hosting the women’s curling fundraiser.
Hakala said she’s hoping to see a bigger, and even better, fundraiser next year.
“Next year is our tenth anniversary, and we want to make it big. This year we have 28 teams, but next year we’re hoping to have 32. That’s the most we can have,” said Hakala. 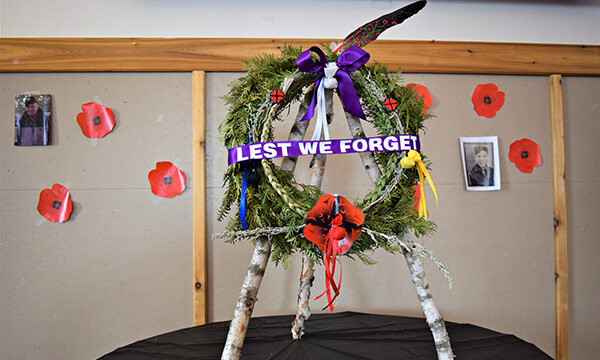 Indigenous veterans were honoured at the Nishnawbe-Gamik Friendship Centre on Nov. 8.