The 39th virtual Sioux Mountain Music Festival offered a day of musical escape for not only local residents, but anyone with a smart device and an Internet connection.

This year’s festival, conducted by the Nishnawbe-Gamik Friendship Centre, staged 18 performances including one live performance, by 44 artists from different parts of the province and the nation.

Sioux Mountain Multicultural Youth Program’s Sioux Mountain online Music Festival 2021 Coordinator, Tommy Kuzemczak, said, “It worked out really nicely. I was really impressed with everybody’s videos that were sent to me. When things are down with COVID, we pulled it off.”

Thirteen-year-old Janzen Esterreicher, who has been performing in the music festival for seven years, played more than 12 songs for this year’s festival as part of two bands, True North and FMJ.

Esterreicher said, “It was good. We worked hard. Tommy worked hard to have everybody actually do a concert, because of the COVID it was hard. So, I would like to thank Tommy for giving me this experience and thank everybody else.” He added, “I’m looking forward to playing on the town beach for the festival.” Esterreicher said that even though he prefers in-person concerts where performers can interact with their audiences, instead of playing in front of a camera, he really enjoyed being a part of last year and this year’s virtual concerts.

Originally hoping to host an in-person concert, Kuzemczak shared that with the uncertainties of the pandemic they decided to have another year of virtual performances. He said that they had started preparations for the festival around the beginning of May.

Sixteen-year-old McKenna Murphy, who has been a part of the music festival for four years, said that even though the pandemic has greatly changed the way music is delivered to the audience, she has always enjoyed being a part of and performing for the Sioux Mountain online Music Festival. Murphy started playing solo, and eventually joined the band Hot Mess that she has been a part of for three years now.

Murphy shared that she performed a set of 10 songs this year and is looking forward to performing in front of audiences again. “Just seeing people and performing at the new stage that is being built at the town beach is going to be really cool,” she said. “We worked really hard, and you know, if it wasn’t for them, I wouldn’t be able to be where I am right now, being able to perform with a band, so thanks to them (Tommy, and her band members) I am able to do that and we worked really hard to be where we are right now,” added Murphy.

“The evacuation (due to forest fires) has really, really hurt the festival this year. But there is always next year! We’ll bring bands from the north,” said Kuzemczak. “Three bands from the north who were supposed to perform…couldn’t because of the fires, and that was really sad because the Sioux Mountain Music Festival is for the north as well. Ever since the inception of the festival was Sioux Lookout and the communities from the north…and all we had this year from the north was a gentleman from Sandy Lake, his band name is Lil’Lucan Linklate, and he is a rock hip-hop artist.”

The music festival also received contributions from artists in Winnipeg, Ottawa, and Barrie, among others. Kuzemczak shared that one of the most nerve-racking things for him was getting the performance videos from out of town musicians. Kuzemczak, along with his team, pre-edited and prepared a general format to outline the running time of the festival before hand. “There are a lot of people behind the scenes that have made this work,” he said.

Nishnawbe-Gamik Friendship Centre’s Master of Ceremonies, Daniel Fraser, who helped organize the festival, while also being the only live solo performer for this year, said that he enjoys hosting the show and also performing in it. Fraser has been involved in the Sioux Mountain Music Festival for about 17 years now.

Fraser shared, “What I enjoy most about the festival is the opportunity for people to hear local musicians from solo artists to full bands, who have been working very hard on their music. The fact that we get to include musicians from the northern reserves allows them the opportunity to be seen. I especially enjoyed Lil Lucan and his guests from Sandy Lake.”

Fraser shared that the theme of his performance was friends. He shared, “All of my songs were real stories of real friends. I also debuted my latest single called “Mayfair.” It is a song about my own hometown movie theatre and how much of a loss it was for our community when it closed down.” Fraser added, “I am looking forward to the upcoming 40th Blueberry Festival and having the music festival live and down at the town beach.”

Kuzemczak is hopeful to conduct an in-person music festival at the town beach next year. He said, “Next year, pandemic allowing, it’s going to be down at the beach. It’s a new stage…and next year is going to be really something when you compare it to this year.” Kuzemczak said that if conditions permit for an outdoor festival, they will also livestream the festival for those who may choose to watch it live from their homes. “It’ll be great next year. That beach is going to look fantastic. It’s really going to look like a million bucks,” he added.

Kuzemczak shared that not only is he hoping to have a grand, in-person music festival next year, but he is also hoping to bring John Cook, an artist from Ottawa to conduct a video workshop with youth before the actual production of the festival. He said, “We were thinking of doing that this year, but there was not enough time, and the pandemic hit harder. So, next year I’m going to try get John to come up and do a week-long workshop on video production with youth, so we could shoot next year’s event and put it on livestream. So, people would have the option of going to the beach to watch the show or sit at home and watch them on their computers.”

Kuzemczak shared that this year’s festival, similar to last year’s, is archived online and can be revisited by anyone at anytime. “If you want to go back and watch it, you are more than welcome to.” The Sioux Mountain online Music Festival 2021 can be accessed online at the Nishnawbe-Gamik Friendship Centre’s YouTube page, or the Sioux Mountain Music Festival 2021’s Facebook page. The festival has had over 21,000 views overall.

“At the end of the day, I am really proud of everybody. Everybody worked really, really hard. Both, musicians and the crew. Everyone worked really hard and I’m proud of what they did,” said Kuzemczak. 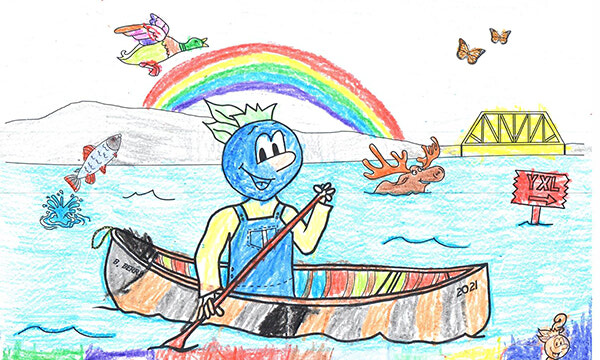 Children 12 years of age and under were invited to participate in this year s Blueberry Festival Colouring Contest.