Sioux Looks Out for Paws continues its work to keep community animals safe and find adoptees forever homes. Winter can be a difficult time for the animal rescue organization, when the need to get animals out of the frigid temperatures can arise quickly, but speaking with Lynda Ducharme, Chair of Sioux Looks Out for Paws pet rescue, it seems the shelter takes all the ups and downs in stride.

As Ducharme relates, “Things are actually going very well. We continue to take in animals and the adoption rate has been very good. We were just full, but we don’t have a lot right now… we have two kittens, two adult cats, and a dog and a puppy. We were right full though just before Christmas. The wintertime is always a more critical time for animals that don’t have a home in frigid temperatures, so we do try to stay empty in case of emergencies.”

One such emergency situation arose just before the holidays when a litter of puppies was in desperate need of care. Ducharme explained, “Before Christmas they found ten pups in a community. They had no mom, and there was no shelter. It was starting to get cold and I’m glad we took them, or they probably wouldn’t have survived, they were pretty sick. In fact, when we got them, I thought three of them wouldn’t make it through the night. I’m happy to report that they all survived. They all made it, it was just a case of hydrating them,

de-worming them, that kind of thing. Those are the easily solvable things. It was a wonderful feeling to see their little puppy tails just a-going!”

With the need to bring animals in from other communities, as well as to transport them to veterinary appointments and new forever homes, Ducharme can’t stress enough the need for volunteer drivers, stating, “If there’s anyone out there willing to drive and do vet trips, that would be amazing. Most people are working during the day and (the veterinarians) only do surgeries and stuff during the week. Sometimes we’re doing three trips a week, so we could really use the help!”

One such trip recently saw Ducharme take a pup to meet its forever family who had made the drive from Thunder Bay to Ignace in order to make the pickup. It’s with obvious affection that Ducharme describes the situation, stating, “We had a dog that needed some training, so all of our volunteers worked hard in getting his behaviours corrected and he got adopted yesterday to a person in Thunder Bay. I just had to meet them in Ignace. We’ve all gotten very attached to him, so it was hard to let him go. They need so much special attention. He was a very smart dog though. He picked up on things so quickly.  We have another that’s a challenge right now that we are still working on.”

Anyone able to assist with transporting animals is asked to contact the rescue through their Facebook page at https://www.facebook.com/siouxlookoutrescue.

With the Municipality recently announcing a three-week hiatus on Animal Control Services to allow By-Law Enforcement to get some training, Ducharme sees a silver lining, in that the training can only help in the long run, stating “It is kind of a stickler because as a rescue we don’t have the authority to go in and take an animal into care, we can only do that if it’s surrendered. I think we’ll have to work closely with bylaw, and even the police sometimes brought us animals. We don’t have the authority to just go grab an animal. I’m happy to know that there is a three-week delay so that the new bylaw officer can get training, and I think that’s great. It does sort of make our life a little more difficult in that people will call us to come and get animals and we have to explain that we don’t have the authority to do that. But if they are prepared to sign surrenders, then we can. We are really looking forward to having a permanent bylaw officer for sure.”

Although the shelter is currently stocked up on essentials, monetary donations are always appreciated. As Ducharme relates, “We haven’t been able to fundraise much because of COVID, but, I’m hoping soon! We are participating in (The Betty White Challenge), so people can donate directly through EMT to our account ([email protected]) , or they can go to Fair Convenience, because Deb Young is doing a collection there. (White) was a lovely woman. Not only did she make us laugh for eight decades but she also loved animals and did a lot to advocate for them. Sioux Lookout is a wonderful town for recognizing and supporting us. I can never stress that enough. If we require something somebody always steps up for us.” 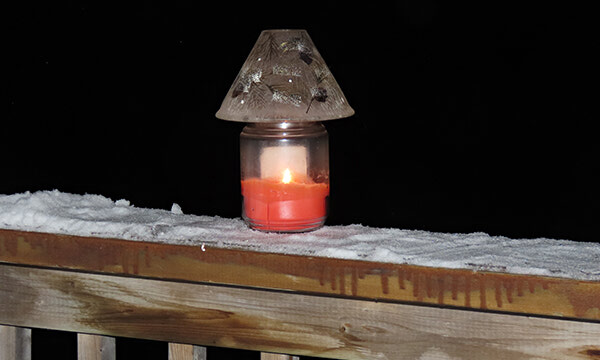 Yankee Candle on the deck railing. It was a mellow evening at camp, watching sunset waltz gently into the night.
From nowhere came the most beautiful music in the world - Wonderland by Night, by Bert Kaempfert...