The Sioux Lookout Skating Club (SLSC) held an exhibition show featuring 20 of their Star program skaters, for family and friends on Saturday, December 11. While in previous years the skating club’s shows have been rather large public events, ‘A Christmas Ice Show’ was, by necessity, a more scaled back affair.

Speaking after the event, Bates stated, “It went great, the skaters did a good job! We just basically put together a Christmas skating performance show, where all of our older Stars, (we have about 20 skaters that are in our Star program), participated, either in doing line numbers or doing solo events. It was our first little show that we’ve put on since COVID, and we didn’t charge admission or anything like that. Normally we do a large show at the end of the spring, sometimes we do it over two days, a Saturday showing and then Sunday as well.” But as in all areas of life, COVID changed things. Bates continued, “Since COVID we haven’t been able to do any of that and our club has definitely gone through a big transition. This was just an opportunity for the skaters to show their parents the different skills that they’ve been working on and bring a little Christmas cheer to all of us.”

Some may remember previous Skating Club events as being somewhat elaborate productions, but the challenges of running a club through the pandemic meant that this show was geared more as a family affair, as Bates explains. “In the past, if you think of one of our ice skating shows we have done a huge, very elaborate type of thing. This was more like an exhibition. It was our students, their families, and some friends, very word of mouth. We used the last two hours of Saturday’s practice to do the performance. Typically, we cover the boards, we have spotlights, and we put up this massive curtain. It’s a full two-hour thing. This, from start to finish, only took about 40 minutes. All of our older Stars did their solos and the younger ones had different line numbers and things. It was just a fun thing for them to skate and perform in front of their families.”

While they may not be able to put on the large yearly shows that they have done in the past, the club continues to work towards prepping for area competitions.

“We are hoping to take part in the Thunder Bay Open, that’s coming up in the first weekend in March.” Bates noted, before continuing, “That will be the first competition that we will have taken part in since COVID hit. We have a new coach, Julia Withers. She has been working with our club since the fall, but she lives in Dryden and has to commute, so we see her on Saturdays, and Sunday mornings, depending on weather and her schedule. We have 20 skaters in the Star Program. There are 14 in our Star One to Four Program, and there’s two boys included in that.” The Skating Club has six skaters in Star 5 and up.

Besides the Star Program the club also hosts younger learners in its Can Skate program.

As Bates describes, that program is now at risk due to trouble finding qualified coaches.

“Tomorrow (Dec. 15) ends our Can Skate program. We offered Can Skate this fall and we had about 30 skaters for that ten-week program, but that’s wrapping up. That has been a great thing, all of those young skaters have come out and done a fantastic job. Coach Kayleigh Bates, that’s my oldest daughter, she ran the program for us this year, but she is going to school in Ottawa, so we do not have a certified coach for the New Year. Unless we can find someone who is certified… and that’s a bit different with figure skating than some of the other recreational clubs that we have in our area. I know how to figure skate, but I can’t coach it because it takes two to three years to become certified through Skate Canada just to be a coach. Finding people who are certified, they don’t just grow on trees… we don’t have anyone in Sioux Lookout currently that is certified in Can Skate or our Star program, so it makes it challenging.” Bates went on to add, “We just don’t at this time have anyone living in Sioux that has their certification. We are looking. We put the word out and had some feelers but they put in regulations that all coaches, volunteers and officials have to be double vaccinated to enter the arena so that has definitely affected our programming this year. We had multiple coaches lined up but now we are down to two, and Kayleigh is leaving, so we can’t even offer the Can Skate program. But that’s just where we are at, we are trying to stay positive and trying to keep things going.”

Despite the challenges facing the club, Bates feels it’s important to stay positive, saying, “It’s interesting how much things changed with COVID. At the same time COVID hit and we had to cancel all of our programming, our former coach, who lived in Keewatin, has retired from coaching. Not only did we hit COVID, but we also hit the point where we didn’t have a head coach who was certified. That is why we had to literally just scramble the last year and a half, just trying to find someone locally who was willing to drive to Sioux Lookout throughout the winter to help our skaters. I want to be positive but compared to where we were two years ago a lot has changed. But my girls still love to skate and that’s where I am as a parent… I’m just thrilled to have the opportunity for them to take part in a sport they love and stay active. It’s a great stress release just being able to get up there and just skate.”

The Sioux Lookout Skating Club is currently running a 50/50 draw for $10 a ticket, with the draw date being December 23. Tickets can be purchased through any club members or at Drayton Cash and Carry. The maximum prize is $3000.

For those wishing to view ‘A Christmas Ice Show’ online, a video of the event can be found on Facebook at https://bit.ly/3oUskXk. 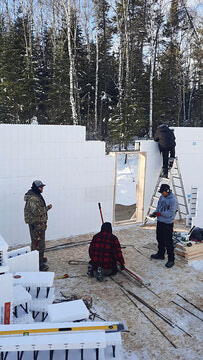 When it comes to the past year at the Sioux Lookout Area Aboriginal Management Board (SLAAMB), Ziggy Beardy takes a rather philosophical view.
It was a very challenging year, our second year under COVID...