The Sioux Lookout Skating Club held its Year-End Celebration on April 9, marking the end of another successful year for the program. The event, which was held at the Sioux Lookout Memorial Arena, saw skaters of various ages perform 24 numbers in front of an enthusiastic gathering of family and friends. The numbers, which ranged from intricately choreographed to improvised, allowed the skaters to showcase skills they had developed over the course of the season.
Becky Bates, club Vice-President, felt that the celebration was a huge success, stating, “The Year-End Celebration was fantastic! The skaters had fun working on their special numbers, even picking out their songs, and it showed in their performances. It was great to watch how it all came together to make special memories for everyone involved.”
Bates continued, “Our STAR 1-4 assessments went well and it was good for the skaters to see their progression this season. Special thanks goes out to our coaches Julia Withers, Kayleigh Bates, and Lynn Traviss-Thompson for working with our skaters this year!”
One of the performers in this year’s celebration was Ruth Broderick, who commented, “I thought it was really good. I think the show was fun. Some of us made up our solos on the spot. Some of us had set movements that we were going to do but a lot of it was just making things up, and it went really well.”
Another skater who performed Saturday was Aubrey Bates, who noted, “I’m really proud of all of the skaters and how hard they worked on putting everything together for the celebration. I think it turned out great and it was nice to have spotlights and decorations, which made it feel more like our past shows. I’m hopeful for next year and what it will bring.”
“It was really great for the skaters to get back out on the ice,” commented Coach Julia Withers. “With the challenges of the pandemic we haven’t been able to do many competitions, so it’s important that we keep them comfortable on the ice doing their solos and performances. And it’s always a highlight to do an ice show at the end of the year. It was a lot of fun for the skaters to get dressed up and pick a song that they would like to skate to. Today’s performance went really well; everyone had very high energy on the ice.”
Withers finished by adding, “Some of these skaters came this year and started this year at CanSkate level and now they’re learning jumps! It’s just amazing to watch them progress.” 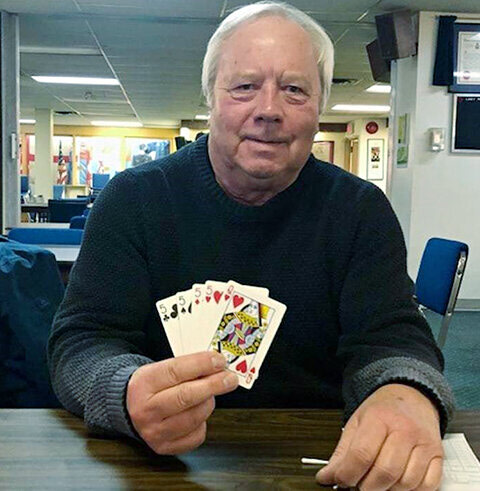 Ted Brezinski displays the 28 hand he got playing Cribbage at the Legion on March 31...