Fifteen skaters from the Sioux Lookout Skating Club earned more than 20 medals at the recent Futures Competition in Kenora on Feb. 16.

The competition was attended by younger skaters in the club, those in Star Skate 1 to 4, who showed off skills they’ve been perfecting over the course of the skating season.

“Talking with a couple of the judges, the kids in our club are meeting the standards, and some of them have gone beyond the standards, which is really good,” Coach Lynn Traviss-Thompson shared.

“Brenda Linden this year participated in the Special Olympics portion of the competition… she excelled in what was expected of her… and she ended up attaining a gold overall,” Traviss-Thompson proudly stated.

Geneva Otto, 11, earned a gold medal in elements, a silver medal in solo, and a bronze in her interpretive performance.

She said she has been practicing hard and was very happy with her performance.

Maddie Wilson, 11, earned two silver medals, one for her solo routine, and one for her interpretive routine.

“I was pretty happy,” she said, adding she has been working on building her skills all season.

Lynn McClure, 10, earned a silver in showcase and a bronze in elements. She was happy how she skated and is continuing to perfect her skills.

Cassey Turallo, 11, brought home a silver for her solo performance, a silver in interpretive and a bronze in elements.

She has been working hard on her camel catch foot skill and is looking forward to the remainder of the season.

This weekend, skaters from the Sioux Lookout Skating Club will be in Thunder Bay attending the Thunder Bay Open.

More than 20 skaters will be attending that competition, including Luke Bates who is trying to qualify for the provincial championship. 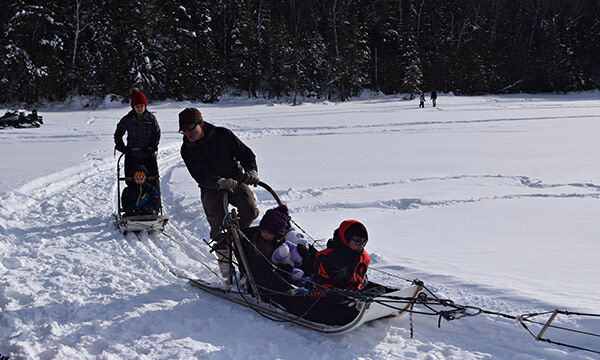 Sioux Lookout residents, and visitors to town, enjoyed an exciting day at the Cozy Cabin on Feb. 16.