Approximately 126 Sioux Lookout and area seniors enjoyed a special festive evening out, courtesy of various community members and organizations, during the 63rd annual Sioux Lookout Senior Citizens Christmas Dinner, which took place in the upper hall of the Legion on Dec. 2.
Seniors enjoyed a festive spread that featured roast turkey, dressing, mashed potatoes, mixed vegetables, perogies, dinner rolls, Christmas cake, and ice cream and strawberries.
Following the meal, the annual dinner featured carol singing from local Girl Guide Sparks and Brownies, a presentation of prizes through various categories, and presents delivered by Santa Claus himself.
This year’s event was convened and hosted by Cornerstone Christian Fellowship.
Jan Hochstetler, chair of the Senior Citizens Christmas Dinner organizing committee, had nothing but good things to say about the event, which she described as special. She said she hopes to see more youth get involved moving forward.
“It’s just such a neat thing for the town to do for the seniors in the community. It’s a really neat community event, and the fact that it’s been going on for 63 years is pretty impressive,” said Hochstetler.
“The thing that we’re seeing now is there’s quite a few people who should be sitting out there eating that are still helping with making the evening happen, so we would love to be able to get some younger people get involved because it really is something that we don’t want to lose or to stop doing. I think it’s a really special time for the seniors to get out and just hang out together,” she said.
Tracks Beside the Water, Vol. 1, pg. 187 describes the annual event, “One of the happiest events of the year in Sioux Lookout is the annual Senior Citizens’ Christmas Dinner and party. In 1982 this celebration will have been taking place every December for twenty-five-years, and it is always a particularly happy event for both the honoured guests and the people who plan and put on the party.
“In 1957 several women at the United Church, including Margaret Atwood and Betty Jean Klassen, conceived the idea of a Christmas party for Senior Citizens. When the women’s groups of the other churches in town were approached about the project, the response was enthusiastic, and a committee of women from Anglican, Baptist, Catholic, United, and Ukrainian Church groups was set up to plan the event.
“The party was first held in three places in turn, the United Church Hall, St. Mary’s Hall or The K.C. Hall. However, in later years, as the Ladies’ Auxiliary to the Canadian Legion joined the church women’s groups in putting on the dinner, the Legion Hall has been the place where the parties have been held.
“Many organizations in town have helped with the party over the years. Guides, Brownies, C. G. I. T., sorority chapters, Lions Club, Legion, and merchants and individuals have all been willing and eager to contribute to the dinner and the entertainment. School choirs, square dance groups, singers, accordionists, - all kinds of programs have been enjoyed through the years.
“One constant feature of the occasion has been the arrival of Santa Claus and the presentation of prizes in various categories, always with special gifts for the oldest gentleman and the oldest lady. Carol singing has been part of the program, too, and guests especially enjoy some time which they can spend visiting with friends and neighbors whom they don’t see as frequently in the long winter months.” 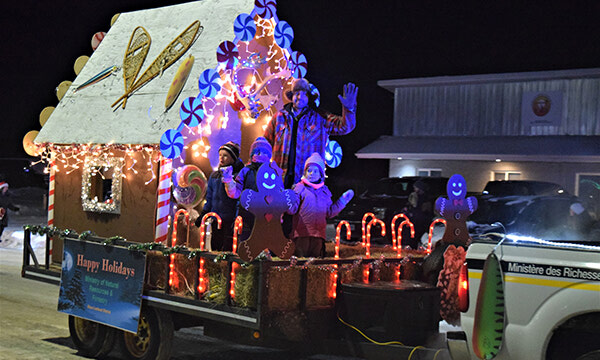 Community members lined the streets to take in this year s Santa Claus Parade on Dec. 8, which was organized by the Sioux Lookout Chamber of Commerce.