Sioux Lookout residents take pride in their community, go to lengths to keep it clean

A handful of local residents have silently been working to keep the town of Sioux Lookout clean and beautiful.

A local resident who has been cleaning up around the town for over 10 years, Karl Friesen, said, “It is very important to bring to people’s attention that littering is just not acceptable and littering is immature, childish, and a lazy thing to do. It is irresponsible to have someone else come pick up after you.” Friesen shared that he likes to see things tidy and often picks up litter between Moosehorn Road and Frog Rapids Bridge, MNR beach and other trail areas.

“We have a beautiful area and I want to keep it that way. I’m not going to allow people just to make it a dump, and I have spoken to people about it, I’ve ignored some people, I’ve walked right up to some people saying why are you littering, and in the past I wrote letters. But I thought if I just set an example on that busy highway, it could motivate others. It’s a high profile area, so I’m hoping when the people see me do that, that they will be motivated to pick a spot of town themselves and keep it clean.”

Friesen said that he feels satisfied to see a clean ditch when he drives past it the next day. He added, “I will clean that ditch up probably three more times before snow’s back.”

Bill and Susan Hochstedler are other common faces that people may have seen cleaning up around town for over 10 years now. Bill said, “It takes everybody to keep our community clean and there are many people that do help here and there, or take a certain section and clean it up once a year. There’s a lot of garbage out there. Would be nice if everyone put their garbage in a garbage can.”

Bill and Susan’s usual cleaning route is from West Point Cove, down 7th Ave and from Wellington Centre to the Sunset Inn.

Bill said that if everyone could even spare 30 minutes a week, that we would have a cleaner and more beautiful community. Susan said that she takes different routes for her walk every day, picking up any litter that comes her way. She thanked other individuals who also put their efforts towards community cleanup.

Corrine Sever, another active community cleanup volunteer, shared that she usually cleans up the area around the Northway Cemetery, while out on her walks. She added, “I think it is just beautiful for the town. We get a lot of tourists around here and they are driving around and to me, it is nice to have a clean area to see, instead of a bunch of garbage.”

Nancy Roy, who ensures a clean surrounding around her coffee shop, said, “We are very lucky that we have all these people. Even though I keep my space here clean, they go beyond and pick up for the whole town. So, hats off to those people.” Roy regularly maintains the area around her storefront. She said that it saddens her to see the amount of garbage that the local parks and streets have. “People used to say, well, we don’t have enough garbage bins around, and that’s untrue. We do. We have garbage bins around.” She encourages community members to use the garbage cans or keep the litter to themselves until they get home.

Friesen said, “I have been to places where garbage is a real problem and I get very upset when I see people just litter when it is so easy for them to put that garbage where it belongs, instead of throwing it out the window.”

“We shouldn’t have to even have this conversion, because most people take pride in their communities, and so, it’s a learning curve and we’re the teachers of it. By us setting an example, hopefully, somebody…if they see garbage on the street, they’ll pick it up,” Roy said. She said that in her opinion, Municipal By-law Enforcement Officer Rob Smetana has been efficiently ensuring that all yards in the area are well maintained, free from any junk.

Nancy McCord shared, “Participating in activities such as community clean up is so important for young children as this habit will follow them for the rest of their lives and hopefully will help make their homes and community a better place for all to enjoy!”

Ethan McCord, 12, who accompanies his family to cleanup, said that cleaning up can be a fun activity benefitting the community. He said, “I like doing it because it helps the environment and makes the town look a lot better. Another reason why is because, it only seems like a boring job, but it can be fun at times and you can also find some cool stuff. Not often, but you can.” Ethan added, “The places that we went to last year when we were doing it, we were able to climb on stuff and have some fun while we were still cleaning up our garbage.”

Donovan McCord, 9, who also likes to pick up litter around town with his family, shared that picking up garbage is important for the well-being of our environment. “As you can probably tell, like downtown, and in all the ditches, you can see a lot of garbage. It is causing pollution and killing the animals. It’s good that we are picking up the garbage and putting it all in that one spot, up at the dump. We just have to do it. If we want our Earth to live, we have to do it,” said Donovan.

Nancy McCord shared that litter not only ruins the look and serenity of where we live, but can also be very harmful to animals and our waterways. “We have learned that although the litter may not be ours, the community and environment surrounding us is ours. It only takes a minute to grab the litter we find while out exploring and it makes us feel better and more safe once it is cleaned up.” She added that she looks forward to even more bags of garbage being collected as part of this year’s Chamber community cleanup event.

The Sioux Lookout Chamber of Commerce will be hosting its second annual Pitch In event, “Take Pride Community Wide,” from April 11th to 24th. Further information can be found at the Chamber’s website at www.siouxlookout.com.

Friesen said that he appreciates the town promoting community cleanup. But, reminds people they do not necessarily have to assign a certain time for cleaning. He said that anyone could cleanup at any time. 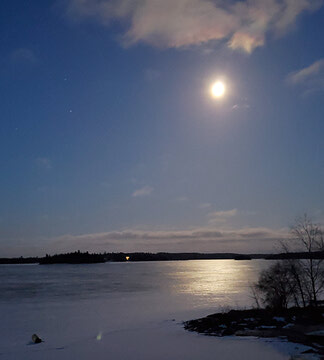