Sioux Lookout resident Krista Williams received the best possible gift over the holiday season - being reunited with her husband Ronique Williams, who is from Montego Bay, Jamaica.

Despite being married for over a year, the couple was separated by 3785 kilometres while they waited for Ronique’s immigration papers to be finalized.

Krista, who was born and raised in Sioux Lookout, said she first met Ronique while escaping a Sioux Lookout winter on vacation.

“I was on vacation (in Jamaica) in February of 2015, and he worked at the hotel I was staying at. I arrived later in the afternoon, so we were just checking out the hotel. Ronique and his friend were at the waterpark, so they were some of the first people we met,” she said.

After keeping in contact through social media, texting, and Facetime following the trip, Krista decided that her next vacation would be back to Jamaica to reunite with Ronique and meet his family.

“I went back in May (2015) for a week. We spent that whole week together and, after that, we decided to make it official and try a long distance relationship,” she explained.

The two kept steady and strong and their next trip not only rejoined them, but it united their families as well.

“By October of that year, my family traveled to Jamaica and our families spent time together,” she said.

Krista was travelling to Jamaica three times a year to see Ronique and, two years later, the relationship turned into a marriage. From there, the goal was to get Ronique to Sioux Lookout for their next life chapter.

“October of 2017 is when we got married. By April of 2018 we filed the (immigration) papers, and by December the papers went through,” she said.

“I was overjoyed and relieved when the papers went through. I wanted to tell everyone,” she continued.

“It was joyful. Very exciting… My family was also so excited. Everyone was so happy for us,” Ronique shared.

Ronique arrived just in time for the holiday season and was introduced to a brand new world that was much colder with fluffy snow everywhere. Despite the obvious climate differences, he shared that it’s a world he’s quickly embracing.

Both Krista and Ronique mentioned that they’ve already experienced plenty of kindness and hospitality from community members. Ronique has already had his first catch on the lake and even tried some traditional drumming as well.

“Everyone has been really welcoming and nice. We’ve had a friend purchase him a one year fishing license, and we had another couple have us over for a nice dinner,” shared Krista.

“A lot of my family is traditional aboriginal, so he’s even participated in some drumming,” she continued.

“I always hear about the culture, so I was so excited to go see it. I was waiting until I could catch on, and it was fun. We don’t have all these different cultures back home,” Ronique explained.

When asked about his hobbies, interests, and employment opportunities in town, Ronique shared that he’s quite the decorated runner back in Jamaica.

“He’d have to travel, but we’re definitely keeping our eyes open for different races for him to participate in,” said Krista.

Ronique explained that it’s been a nice change going from constant public recognition to a situation where it’s the complete opposite.

“Back home, everywhere I go there’s always someone that knows me because of what I do as a runner,” he said.

“Sometimes it’s fun, like when I’m going to my races, but when I’m walking on the street it can be annoying. Coming here and no one knows about me, that’s awesome,” he concluded.

As of right now, Ronique plans to continue spending his time exploring Sioux Lookout, and what the community has to offer, while enjoying each new adventure with his wife Krista. 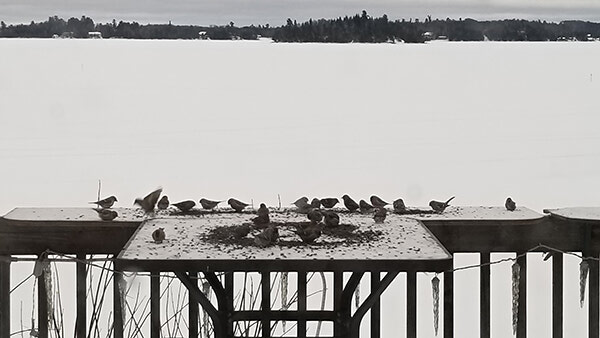 Dick's Hideaway: The sun will return

In my mind, today is the day - January 6 - when daylight really starts to get longer. I know, the days start getting longer about December 22.