“I used to write the term ‘lost to me’ but I didn’t lose this, it wasn’t intentional on our family’s part!”

When Kanina Terry speaks about her desire to reconnect with her culture’s ancestral knowledge, she does so with passion.

So, when Terry started to feel a disconnect between herself and her ancestral Nishnawbe culture, she decided that to move forward, she needed to look back.

As Terry describes, the path to reconnect with her past started with food. “It kind of started with food for me, wanting to learn more about traditional foods, and recognizing that there are different ways to cook moose meat, there are parts of the moose that we aren’t using, there are parts of the fish that we harvest that we aren’t eating, and also seeing that a lot of people from the northern communities, who grew up in the north, they have a lot of that food knowledge still, so I’ve been trying to reclaim that as well. Learning that there are different parts of the animals that we typically don’t use, that we would have used, because to survive in this climate we would have been using as much as we could of animals that we harvested.”

Then an opportunity to partake in a deer hide tanning workshop in Thunder Bay offered Terry another avenue to explore her connection with the past. As Terry relates, “I’d seen that over the last 20 years, that the number of products made with home tanned hides has almost gone down to zero in this region. Almost no products were being made with home tanned hide in the last decade. It’s something that I’ve always loved the smell and the feel of, but I never really thought it would be something I would learn, until I saw this workshop. My son and I went for four days and we came home with a tanned deer hide!”

From tanning deer hides, moving on to moose seemed a natural progression. As Terry explained, “From tanning deer hides I started wanting to tan moose hides since my family doesn’t harvest deer, we hunt moose. Typically (now) hides get left in the bush. We wouldn’t be using that part of the animal. When I started working on deer hides, I knew that that (moose) was something I wanted to do, but I wasn’t able to find people to learn directly from here, in Sioux Lookout or Lac Seul.”

As it turns out, it would take a bit of detective work and the help of friends and family to piece together a moose hide tanning process that worked for Terry. In a connected world, sometimes the sharing of knowledge is just a mouse click away. “A lot of the learning I had to do I did through word of mouth, by watching YouTube videos, and I did by just doing it. My dad has been an awesome help. Helping me build frames, and helping me with tools, and also by sharing knowledge that he’s gained by working in northern communities and talking with people who’ve done it. Through this I’ve been sharing what I can as I’m learning. I’ve been sharing what I’m doing on social media and as a result I’ve made some really awesome connections with people all over Canada, and some parts of the (United States). People who are also striving for this knowledge, and recognizing that this is important knowledge, that it’s important that we don’t lose this. I’ve made some amazing friends through hide work.”

Finding the time to continue that work got a little easier when Terry received a grant through the Canada Council for the Arts. “I got the grant from the CCA to work on hides, so I’ve been able to dedicate more time and not just try to fit it in here or there, which lets me spend the majority of my time just working on hides. I have one bison hide, I think three or four bull moose hides waiting, and one moose hide ready to go for the next step. I’m planning on scraping them in the winter once it gets much colder than this.”

The grant was part of the CCA’s Creating, Knowing and Sharing program. As Terry explains, “I found one that the CCA offered called Creating, Knowing and Sharing. It’s only available to Indigenous, Metis or Inuit artists who are knowledge carriers. You don’t have to produce finished artwork, it’s really about continuing knowledge and continuing culture.”

Her work of recovering traditional skills recently put Terry on the radar of the Municipality of Sioux Lookout’s Environment Committee, which in November recognized Terry, in part, for “learning sustainable harvesting practices, and how to live in reciprocal relations with people, land and animals.” The traditional methods of First Nations peoples were, by their very nature, sustainable practices, so the Environment Committees goal of providing “leadership, education, and action on environmental best practices, with an emphasis on identifying local aspects of adaptation to and mitigation of climate change”, would seem to tie in with Terry’s work quite well.

With all that said, Terry is proud of the work she has done to this point. “I’ve finished one full moose hide from a moose my brother shot last fall, the rest I have in various stages. And I’ve tanned four deer hides, and one full elk hide.” So, what does moving forward look like for Terry at this point? “Continuing to tan hides, share about it, teach through community visits and hide camps, learn how to tan animals with fur….and creating more!” 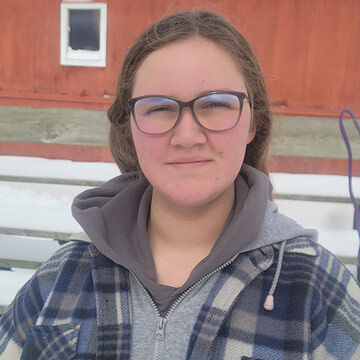 Question of the week: Now that we’ve had our first significant snowfall, were you prepared for winter?