Sioux Lookout band Hot Mess shared that they had the experience of a lifetime playing at the Wake The Giant Music Festival at the Thunder Bay Waterfront on Sept. 14.
The all-day festival featured performances from Luke Warm and the Cold Ones, Ansley Simpson and Nick Ferrio, Ernest Monias, Coleman Hell, July Talk, Wolf Saga, and Metric.
According to wakethegiant.ca, “Wake The Giant is a cultural awareness project in Thunder Bay aimed at building understanding and showing Indigenous people that they are valued members of the Thunder Bay community. The music festival is a celebration of all cultures with a specific focus on Indigenous people and promoting Indigenous musicians.”
The band Hot Mess is made up of singer McKenna Murphy and drummer Eric Goretzki, members of the Sioux Lookout Multicultural Youth Music Program, who play alongside their program mentors and teachers Paul Matousek, guitar, and Tommy Kuzemczak, youth music coordinator and bass guitarist.
“It was a great experience. These two (Goretzki and Murphy) got to play on a big stage,” said Kuzemczak.
“We went on at 2:30, and we played for about 15 minutes… They loved us. Anything we needed, they gave us,” he said.
“I think it was my biggest stage ever… It was like being royalty. It was really nice… We had a green room with snacks. It was so cool,” said Matousek.
“I was nervous until I got on stage. It was fun… I definitely want to keep playing more big stages,” said Murphy.
“I didn’t find I was too nervous. It was bigger, but I go into every show pretty much the same, so I didn’t feel too nervous. I had faith in these guys that it was going to go well… It was one of our best shows we’ve ever played I think. We were ready going into this,” said Goretzki.
“It was pretty exciting to be up on stage. You get a rush of adrenaline while you’re up there. Coming off the stage, I could still feel it until I was coming home. I was super pumped the whole time. It’s by far the biggest crowd I’ve ever played for,” he added.
Kuzemczak shared approximately 400 hundred people were in attendance during their performance.
During their time on stage, Hot Mess played covers of Zombie by The Cranberries, Dirty Laundry by Carrie Underwood, and First Time by Sam Coffey & The Iron Lungs.
Prior to taking the stage, Hot Mess was introduced by Patty Hajdu, Liberal Party Member of Parliament for Thunder Bay-Superior North.
“Hot Mess is a great name. It kind of reminds me of politics right now, but it is a fabulous name. Also, they are really engaged with the Youth Multicultural Centre in Sioux Lookout. There’s lots of work being done there as well to make sure students that come to Sioux Lookout have an equally positive experience and get that education that they need and deserve. So, welcome Hot Mess. Give them a round of applause. This is their second year in existence, and we’re just so glad they’ve come to share music with us,” said Hajdu, addressing the crowd.
The Sioux Lookout Multicultural Youth Music Program, which is run out of the Sioux Lookout Multicultural Youth Centre at 54 Front Street, is entering its third year of programming.
Their Facebook page, @youthmusicprogram, reads, “The Multicultural Music Program is a place of learning and performing the Art of Music. Development of Musicians and Bands to be the best that they can be.”
Murphy, who has been in the program for two years, and Goretzki, who has been in the program for just over two years, shared that they spend a lot of time practicing both at the Youth Centre and at home.
“I’m here practicing with bands for at least three or four hours a week and then at home for another three or four hours,” said Goretzki.
“I’m here practicing for around two hours on Wednesdays, but I do practice at home as well,” said Murphy.
“She sings at home every day. She sings all the time,” said Jason Murphy, McKenna’s father.
Jason Murphy had high-praise for the Multicultural Music Program, which has provided opportunities for McKenna and other local youth to learn and improve their music skills.
“For a small town to have a program like this, there’s so many kids that are being introduced to music that would not get the opportunity if we didn’t have this program. The job that Tommy is doing here is second-to-none. It’s fantastic,” said Murphy.
“My daughter, she has a good voice and she has natural talent but in a small town like this, if Tommy didn’t have this program, she would never have had an avenue to be able to express that and be able to learn and get better. He goes out of his way to make sure the kids are getting good training, getting exposure, and getting better at progressing their talents,” he added.
“This is a regular thing for me. Every Tuesday to Saturday I’m down here… It’s become a part of my life… The Sioux Lookout Multicultural Youth Music Program, there’s never been anything like that before. There was always a youth centre, and there was always bands in the youth centre. It’s a lot of fun,” said Kuzemczak.
After performing at the Wake The Giant Music Festival, both Goretzki and Murphy said they’d love to continue to pursue music in the future.
“Yeah I’d love to try and do something with music in the future. I think that would be pretty cool,” said Murphy.
“If I got the opportunity, I’d love to do it as a profession. If I ever got the opportunity, it would be special,” said Goretzki.
Anyone interested in enrolling in the Sioux Lookout Multicultural Youth Music Program is encouraged to check out their Facebook page by searching @youthmusicprogram or Sioux Lookout Multi Cultural Youth Music Program. 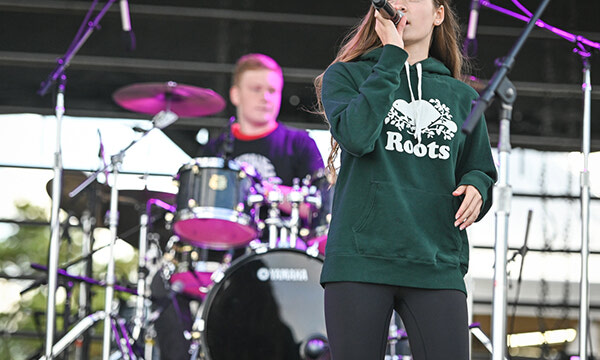 Sioux Lookout band Hot Mess shared that they had the experience of a lifetime playing at the Wake The Giant Music Festival at the Thunder Bay Waterfront on Sept. 14.