The Sioux Lookout Public Library has initiated a Facebook group in hopes of doing a big local community read program in Sioux Lookout and Lac Seul First Nation later this year. The library’s Chief Executive Officer and Chief Librarian, Michael Laverty said, “The Library was trying to find ways to reach people in the community, without people actually coming into the building. Just trying to find ways for people to engage with their library and talk about reading in a large group.”

Commencing the group with Sioux Lookout Reads (Canada Reads 2021 Books), Laverty shared that the library is hoping to get community members reading and interacting through this group, aiming to especially gain more interest among young adults to read. He shared in a Facebook post that this group is open to everyone who is reading, or wants to read some of the 2021 Canada Reads books and talk about them with other people in the community.

CBC’s Canada Reads is a “literary Survivor,” with celebrities championing books every year for the past 18 years. With the debates running from March 8 to March 11 this year, every day, panelists will vote to eliminate one book, until a single title is chosen as the title the whole country should read this year. The event consists of a long list of 15 books, and the eventual short list of five books that is determined by the Canada Reads panelists and their passions.

Laverty said, “We thought that Canada Reads is a good drop-off point for something like this, just to get people into the idea, trying to get a lot of people to join the group. You just need to request to join it and we approve anybody. It’s an open group that people can join.” Those interested can join the Sioux Lookout Reads (Canada Reads 2021 Books) Facebook Page. He added, “From the Library’s perspective, we’re trying to tap into what the readers of Sioux Lookout are into. So, looking at the community of people that are already actively engaged and reading, and wanting to talk about it.”

Laverty said that the library has two copies of every book on this year’s Canada Reads long list, and those shortlisted. People can also access an audiobook and an eBook version online, via the Libby app. “Basically, it’s like a book club. But, trying to do it on a much bigger scale and then people just discuss the books online,” he added.

Laverty said that upon the completion of this year’s Canada Reads event, the library hopes to keep the club going. “We’re working towards something that’s called the Big Community Read, and that’s where you take one book and then you try and get as many people in your community as you can to read it.” He added that the library would also consider getting the author and publisher involved, to finance a virtual reading.

“We’ve set aside in our budget to do it this year. But we would definitely be interested if anyone else would like to come on board and help us out,” Laverty said. He shared that a lot of the big community reads pick a book that is relatively accessible. Laverty added, “The reading level may be for grade 8, grade 10. You might want to avoid a literary elevated prose, that’s kind of challenging for most casual readers. So, you kind of pick something that’s captivating.”

Laverty shared that upon completion of the Community Reads event, the Library may consider sending those books off to a different community. He said, “A northern community or one of our neighboring First Nation communities, a neighboring municipality, if someone’s interested, we can look at moving large quantity of books over to them, possibly recoup some of the costs or maybe just hand it off as a donation and let people do it as they want.”

Laverty shared that this is a great way to get a book in a person’s hand without having them pay for it. “I think reading is something you do by yourself. But, it’s also great to share it with people. I think that sometimes people can get kind of isolated. I think even before COVID, that kind of happened in Sioux Lookout.” He added, “So, you may talk to someone you wouldn’t normally talk to, have your viewpoints maybe challenged or even validated.” 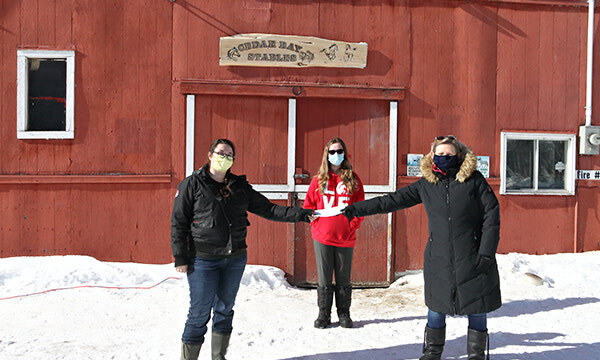 A $1000 donation from the Rotary Club of Sioux Lookout to the Friends of Cedar Bay has helped Cedar Bay stables purchase much needed tack and blankets for its horses.
We have some issues with not enough equipment (tack), so we ve asked them if they...