The municipalities of Sioux Lookout, Kenora, and Pickle Lake have formed a coalition to address the significant costs of providing police services in their communities.
“Since the new policing cost model was introduced in 2015, we’ve advocated for change. The formula doesn’t work for us. And after seven years here we are and with this election coming up, we certainly want to get the attention of all the candidates and speak to them and get them to take a positive position for us on this, and then we anticipate them continuing through, if elected, to continue to try and have success by the end of the year,” Sioux Lookout Mayor Doug Lawrance shared.
In 2015, the Ontario Government introduced a cost-formula for all municipalities using the Ontario Provincial Police (OPP) to deliver local services. Since that time, taxpayers in Sioux Lookout, Pickle Lake and Kenora have collectively paid $4 million more a year for policing than the average cost paid in other communities – money that the mayors of the three communities say could have been put towards critical infrastructure projects such as shelter, housing, roads, bridges, and other community needs.
“For Sioux Lookout, it’s about a million dollars a year that we’re paying. Even with the discount we’re paying a million dollars more than a normal community in Ontario pays for OPP policing costs and that money, you know how much we need that money in our community to undertake many needed projects,” Lawrance said.
“The formula is based on a cost per property, while our three municipalities serve a population ten times the size of our tax base,” said Dan Reynard, mayor of Kenora. “We are each hubs for dozens of northern and remote communities, and each other. Our municipalities act as regional resource centres for healthcare, pharmacy, education, legal, and transportation services for First Nations peoples living in a geographical area larger than Germany.”
A news release issued by the Municipality of Sioux Lookout explains, “The OPP cost-formula is based on a combination of basic costs charged to every municipality in Ontario, then adding different costs for each municipality based on the number of calls for police services, overtime, and other items such as prisoner transportation and security for jails and court houses, plus the cost of holding people in detention cells.
“Of all 306 municipalities served by the OPP, the three municipalities represent less than one percent of the total number of properties the OPP serves yet make up over four percent of the total calls-for-service hours. By a significant margin, the coalition municipalities have the highest policing costs of all communities that use the OPP to provide local police services.”
The formula has resulted in per property costs of $832 in Kenora, $934 in Sioux Lookout, and $950 in Pickle Lake.  By comparison, the median cost for OPP services in Ontario is $300 per property. While Pickle Lake and Sioux Lookout receive some discounts, there is no guarantee that these will be extended.
Kenora receives no discount. Sioux Lookout receives a partial discount on its bill and Pickle Lake, a discount on only its calls for service and overtime costs.
“For our hub-based municipalities, the province’s OPP cost-formula clearly hasn’t worked,” Lawrance said. “It is one of the most important problems we face. It’s also the most easy to solve, if the provincial government is willing to work with us.”
“While we did achieve a certain subsidy, it still left us as one of the highest OPP policing costed municipalities in the province. We’ve been advocating for cost relief for years. Kenora’s costs have crept up. Pickle Lake has no guarantee of their costs staying where they are, and we are the three outlier communities in the province in terms of OPP cost per property and reaching out to the other mayors, we all decided to form a coalition,” Lawrance said.
The goal of the coalition is to work with the Government of Ontario to seek a solution that is fair to its municipal taxpayers and financially sustainable.
Pickle Lake mayor Dwight Monck said, “If the Government of Ontario fails to address this situation, we will have to take serious action. The ability of our property owners to pay higher taxes has reached the breaking point. If our policing costs rise, we may have to further reduce other services to the residents, businesses, and organizations who call our communities home.” 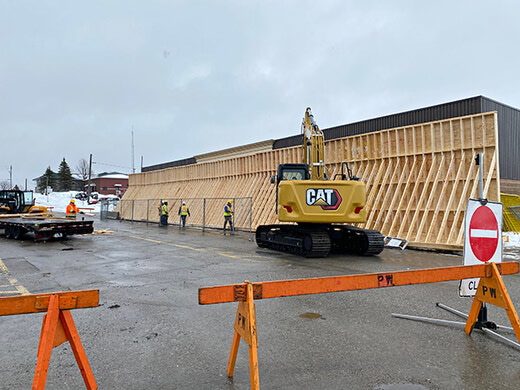 After being partially closed since the evening of March 3, Front Street fully reopened to vehicular and pedestrian traffic on April 22...