“The situation is increasingly dire in Northwestern Ontario Indigenous communities,” say a group of 47 physicians from Sioux Lookout in a letter sent to Marc Miller, Minister of Indigenous Services Canada.

The group of physicians are calling on the federal government to, “urgently increase funding for nursing, support staff and housing.”

“Even pre-COVID, nursing resources in remote First Nations communities were woefully inadequate to meet the health care needs of the population,” the group of physicians shared in a news release issued last Friday, stating they have been advocating for increased nursing, support staff, and infrastructure since before the pandemic.

“However COVID has brought the issue to a new crisis level. Mental health emergencies have been increasing due to prolonged community isolation, while preventive care has been further deprioritized. Nursing stations, which were never conceived, designed, nor staffed to be 24-hour emergency rooms, have become just that. Yet staffing numbers remain stagnant at pre-pandemic levels. What is more, these few nurses soon will help to shoulder the burden of the largest vaccination campaign in Canada’s history,” the group of physicians shared.

The group of physicians say deploying more nurses on the ground is not the only priority, “These communities also need the administrative staff, infrastructure, and housing to support these personnel. The pandemic context adds an additional challenge, as most health care workers are obliged to share accommodations, thus eliminating their ability to properly self-isolate when traveling from “red zones” and putting these front-line workers and the communities they serve at unacceptable risk.”

The group stated that, “Indigenous Services Canada’s neglect of such chronic issues has created an evolving crisis on the ground.”

“Indigenous Services Canada has supported the process of Health Transformation, which under the leadership of Nishnawbe Aski Nation, will implement many needed changes to the structure and functioning of the health care system in Indigenous communities in Northwestern Ontario.

“In Sioux Lookout, the Sioux Lookout First Nations Health Authority is also providing essential leadership in health resource planning. However, in parallel with this longer-term process, funding for more nurses, along with the necessary community-based administrative staff and housing infrastructure to support their work, must be provided to meet the urgent and immediate needs of these communities now. The time to end substandard care to Indigenous communities is now,” the group of physicians stated.

In a statement released later that day (Jan. 29), Kiiwetinoong MPP Sol Mamakwa called on Premier Doug Ford to take immediate action to support the physicians as they call for more frontline staff for First Nations.

“During this pandemic as COVID has spread to five communities in Kiiwetinoong, it’s completely outrageous that both the federal and provincial governments have been ignoring the calls for help from so many doctors in the Sioux Lookout region.  The Ford government should have been taking action in these Northern Ontario communities from day one and supporting First Nations health care and housing. It is unacceptable that the Ford government continues to play jurisdictional games with the lives and the health of the people of Kiiwetinoong.

“Doug Ford has ignored the chronic shortages of health care in fly-in Northern communities, lack of safe housing, and the very basics like the need for clean running water for families.  COVID-19 has worsened the existing mental health crisis in the North and mental health emergencies have been increasing due to prolonged community isolation.

“Doug Ford should be listening to these doctors and taking immediate action. They work in our communities.  They are sounding the alarm.  Health care providers need help, and Doug Ford should send it now.” 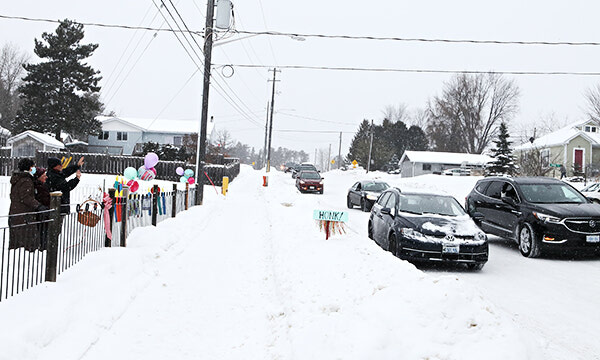 Community members out running essential errands on Jan. 30 were invited to drive down Fifth Avenue between 1:00 and 1:15 p.m. to show some birthday love for Luigina Bastone, who celebrated her 95th birthday that day.

A steady stream of vehicles drove..