Work is underway to reopen the Sioux Lookout Memorial Arena for the season. Scheduled to open on September 14, staff began making ice on August 27. The arena will be open Monday - Sunday, from 6 a.m. to 10 p.m. until October 4, after which hours will be extended to midnight.
Recreation and Cultural Acting Manager Chris Favot said, “To start the season, we have six user groups that have booked time slots. We could potentially have four more of our usual user groups later on in the season, depending on regulations set out by their boards.” He added that start up dates for public skating and other Recreation Department programming would be announced in the near future. “We have created a new set of guidelines for anyone entering the Arena portion of our facility. We will be educating everyone as we open and proceed, such as we have with the Recreation Centre portion of our building,” Favot said.
Before the arena is open for the public to relish the activities it has to offer, there are several things that must be done to prepare the arena, beginning with vigorous cleaning of the cement pad. It takes two days for the ice plant to make the surface cold enough, before the water can be laid on the cement. “We measure out our face dots, put a quarter inch nut in each location and freeze them in with water. We put 10-12 floods of water on the pad creating our first layers of ice. Then take three boxes of white powdered paint and mix it with water in our tank. We make sure our ice temperature is below 16°F before spraying it on with our mister. We do one coat and wait for the ice temperature to fall back below 16°F and repeat three times,” explained Favot.
Red and blue colored wool is used to mark off the rink. They are then painted, before a fine mist is sprayed over to seal them. “Next we find the nuts we laid out for the face dots and run fine black thread length and width wise to connect these dots. This gives us a center point for each of our faceoff dots, minus the centre ice dot. We just measure from board to board to find centre ice. Next we find the centre point between our goal posts and the centre point of our goal creases. We lay them out and match up marks to centre our creases, then sprinkle water on them with a watering can to freeze them in,” said Favot.
Once the groundwork for the preparation of the rink has been done, it is then painted and sprayed with a fine mist of water to seal it in. This process of building a layer of ice over the paint takes several applications. A stencil is then used to draw out the faceoff dots and the hash marks. “Once complete, we paint them red and then repeat sealing them with water. We then move onto laying out the logos. They are all fabric. Depending where we are putting them, we measure distances, centre them, and once ready, put water over them to freeze them in, finally moving back to putting floods on the ice with our sprayer,” he concluded. 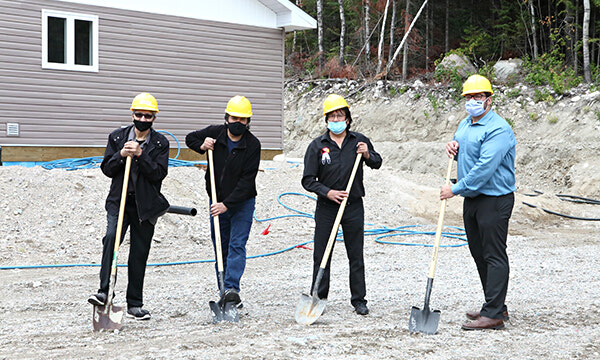 At first it was kind of scary because you don t know what you re doing... For me, this is my dream career, shared SLAAMB carpentry trainee Tristan Korobanik.