Lawrance shared in the April 30 MCCC video update, “Sioux Lookout and the northern First Nations are truly interconnected. COVID has added another element to that connectedness, and we have all recognized that we must work together in support of our public health agencies to limit the spread of the coronavirus in all our communities.”

Mayor Lawrance and Dr. Young Hoon shared that Sioux Lookout may witness a slight difference in the rate of vaccine rollout as a result of a higher urban Indigenous population. Lawrance explained that in collaboration with all partners, it was decided to combine the urban-Indigenous and the regular allocation of vaccines into one pool, to conduct combined mass vaccinations without distinction.

Lawrance said that based on the vaccine allotment, all eligible Sioux Lookout residents should be covered. However, it will depend on whether or not the health unit receives those vaccines, and how that rolls out from the province. “All the vaccines we need aren’t currently sitting in a freezer somewhere in Sioux Lookout. They have been allocated and planned for shipment to come here. But, they are not in your hand, until they are in your hand,” he said.

An April 29 Ontario news release stated that with procuring a stable and reliable vaccine supply from the beginning of May, the province and its partners now have the ability to not only provide more certainty in Ontario’s vaccine rollout, but further accelerate timelines to get more shots into arms. As of 8:00 a.m. on Tuesday, May 18, individuals aged 18 and over in 2021 across Ontario became eligible to book a COVID-19 vaccine appointment. Eligibility is scheduled to expand to youth aged 12-17 in the week of May 31.

Lawrance shared in the video update that vaccinating the maximum number of adults during the month of May would optimize protection for all residents of Sioux Lookout, and northern First Nation communities serviced by Sioux Lookout.

The release adds that once vaccinated, it takes two-three weeks to build immunity after each dose, and one must continue to practice prevention measures to protect others, even after being fully vaccinated. Lawrance shared that the municipality is expected to have enough vaccines to also accommodate potential latecomers.

Dr. Young Hoon shared, “We have taken the transient community into consideration in our planning through consultation with ORI (Ontario Remote Immunity), and by offering partner clinics through SLFNHA and many others, and anyone eligible for the vaccine will be able to receive one within the month of May in Sioux Lookout. This includes those who are considered ‘transient’.  We will be offering clinics throughout May in Sioux Lookout and have enough vaccine for any eligible person who wants one in the community.”

Lawrance said that Sioux Lookout is currently at pace with its vaccine rollout, and encourages all community adults to get their shots. “I look forward to the vaccines absolutely being available, getting vaccines to everybody who wants to be vaccinated and can be convinced to be vaccinated. I hope no later than the middle of June…some people would have already received their second vaccine,” he said. 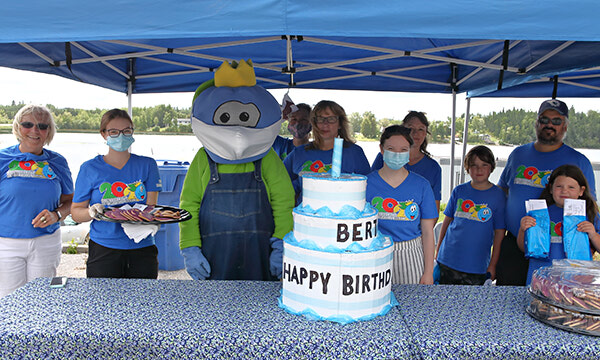 The Sioux Lookout Blueberry Festival Committee is committed to transforming their operations as required by the evolving COVID guidelines, to ensure delivery of yet another successful festival...