The Sioux Lookout Lions Club has been forced to seek creative fundraising avenues due to COVID-19 restricting their ability to raise funds as they normally would.

Due to COVID-19 restrictions, and uncertainty, the Sioux Lookout Lions Club announced in May their annual Canada Day fireworks and activities were cancelled this year. Those cancellations caused the club to miss out on their biggest fundraising opportunity.

The club has since been selling items on local Facebook Buy and Sell and Storage Wars groups as part of fundraising efforts. They said the Facebook sales have been successful so far.

“Canada Day is our biggest fundraiser. We run the events down at the Town Beach, normally, and then we purchase the fireworks for that night. Without Canada Day, that’s a huge part of our fundraising for the year, so we had to be a bit more creative. At our last meeting I had offered to put some of the rocks that I paint onto Storage Wars to bring in whatever I can. From that, we had some people that contacted us that donated a series of lamps and lights that they had taken out of their home. They told us we could sell them and keep all the profits for the Lions Club, so that was awesome,” said Lisa Larsh, Sioux Lookout Lions Club Secretary.

“It’s been excellent. In the first set (of sales), just with the lights alone, we brought in over 300 dollars. I’m not done with those yet. I didn’t sell them all at once, so I have more on Facebook now. The rocks have brought in over 70 dollars so far, and that’s only three rocks so it’s been good,” she said.

In her sales posts on Facebook, Larsh confirmed proceeds will support the local Lions Club in hosting future events.

“Sioux Lookout Lions Club Fundraiser - COVID-19 has affected all of us, including Service Clubs and their ability to fundraise in typical ways. We have had a generous donation of a number of vintage lamps/lights from the Lalonde family. All proceeds will go to the Lions Club to support future events (e.g. fireworks, bursaries, dog guides, etc.),” Larsh said on Facebook.

Larsh said she’s been amazed by the community’s support for local organizations that have been struggling during COVID-19.

“Everybody seems to be doing their part in Sioux Lookout. Everybody is trying really hard to help the organizations that are struggling, and give things away to help other people benefit from what they don’t want to use anymore. It’s been absolutely amazing,” she said.

According to lionsclub.org, “Lions Clubs International is the world's largest service club organization with more than 1.4 million members in approximately 46,000 clubs in more than 200 countries and geographical areas around the world.” 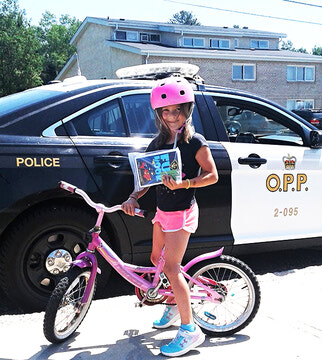 Sioux Lookout OPP and Fresh Market Foods are partnering together to recognize youth for safe bicycle riding skills as well as responsible and caring behavior through their Positive Ticket program.