Sioux Lookout community members, and visitors, joined the Sioux Lookout Community GSA (Gay Straight Alliance) and Sioux Lookout Pride at the Municipal Offices on May 31 to kick off Sioux Lookout Pride 2019 with a flag raising ceremony.
Mary-Ann Flatt (Sioux Lookout Community GSA founder) and Stephanie Diebolt (co-chair of Sioux Lookout Pride) were joined by Sioux Lookout Mayor Doug Lawrance in raising the pride flag at the municipal offices, where the flag will remain waving for the entire month.
During the ceremony, participants acknowledged the community of Pikangikum as they continue to deal with evacuations due to a wildfire.
“We cannot ignore that another community is in crisis. Our thoughts and prayers are with the people of Pikangikum as they are evacuating their homes during this very moment as they are threatened by a wildfire. They will be passing through our hub of Sioux Lookout and we may act as a hosting community in the coming days. During this time we ask that our community members offer our love and support during this difficult time,” shared Stephanie Diebolt.
Following the ceremony, St. Andrew’s United Church hosted a community feast. After the feast, participants had the chance to hear from knowledge keeper Ron Indian-Mandamin, who identifies as two-spirit. He journeyed from Shoal Lake First Nation to join the group.
While addressing the crowd at the ceremony, Mary-Ann Flatt shared the importance of coming together and showing support as a community.
“It is a fact active, vocal, and visual support, especially from our allies, is a key element in the fight for equality, acceptance, and inclusion. We must create safe spaces. We must make ourselves present. When we open our hearts and minds, even a little, we change lives and we save lives… Pride parades, GSA clubs, human rights campaigns, support groups, hashtags, social activism, and conferences all play critical roles in keeping people informed, engaged, and safe. We as a community have the power to open minds, start healthy conversations, and show visible support,” said Flatt.
When asked about the Sioux Lookout Community GSA and how far it has come, Flatt had nothing but good things to say about the development and leadership shown by past and current members.
“We have seen many generations pass through our club and knowing that we helped make their teen years a bit easier and given them opportunities to discover themselves, build confidence, and give them permission to be their authentic selves makes it worth every second,” she said.
“They continuously demonstrate leadership not only in the youth centre but also by representing our club at an international youth conference, Outshine, and by providing ongoing education, advocacy efforts, as well as organizing pride and community events,” she added.
“I’m proud of my two kids who came out when they were in high school, and I’m so thankful that they had a GSA club to go to for support… I’m proud to live in Sioux Lookout where our 2SLGBTQ+ friends are able to live loud and proud and be who they were created to be,” shared Sylvia Davis.
Pride 2019 celebrations will be continuing on June 15 when the Sioux Lookout Community GSA hosts their five kilometre colour run/walk and picnic at the Sioux Lookout Tourist Information Centre. The run/walk will be start at 10 a.m. Those who haven’t yet registered can do so on race-day at 9 a.m.
For more information, contact [email protected] or checkout their Facebook page @siouxGSA. 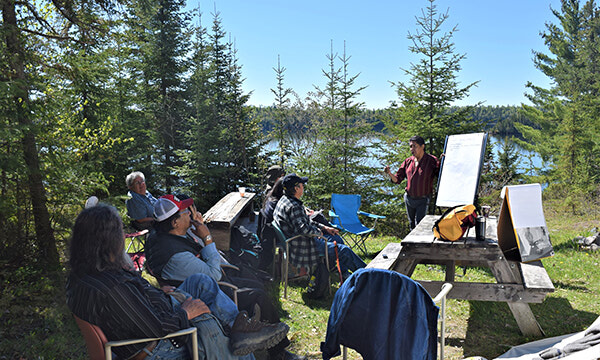 More than 30 elders gathered together for a language and knowledge sharing symposium in Sioux Lookout from May 27 to the 31.