Sioux Lookout hosted Northern Ontario School of Medicine (NOSM) board members on May 9 and 10 for their board retreat.
This year marked the third time that NOSM board members have held their retreat in Sioux Lookout. Their retreat featured a welcoming in the Sioux Lookout Meno Ya Win Health Centre (SLMHC) ceremonial room, walking tours of the health centre, various workshops and meetings, a meet and greet dinner at the Sunset Suites, and a miichim lunch and learn at the Nishnawbe-Gamik Friendship Centre.
“It’s been a wonderful experience… We’re very proud to have them come to Sioux Lookout, we’re proud of our community, we’re proud of our hospital, and we’re proud of our NOSM programming here in Sioux Lookout. It’s nice that they get to recognize what we’re doing here for our community,” said Michelle Hrynchuk, NOSM Site Administrator and board retreat coordinator.
The meet and greet dinner featured acknowledgements from Sioux Lookout Mayor Doug Lawrance along with a presentation of Associate Professor Honorarious to Dr. Diarmuid (Dermot)   McLoughlin.
McLoughlin is a founding NOSM board member and started work with the SLMHC in 1976. His wife Deirdre McLoughlin, along with his son Barry and daughter-in-law Mary, accepted the award on his behalf. Deirdre touched on his love of NOSM, teaching, and practicing in rural and remote areas during the presentation.
For Dr. Roger Strasser, who is the current Dean and CEO, this board retreat marks his final one as the Dean and CEO. His term is finishing at the end of June after serving 17 years.
Sarita Verma, who is the Dean and CEO designate, is excited for her new role and honoured to step in after Dr. Strasser.
“I think it’s going to be amazing… I’m hoping that I can learn a lot about the board. I’m hoping that I can participate with everybody as an ally in being someone who addresses the issues in the north for health care, for all our communities, especially our Indigenous   communities, and make it sustainable,” shared Sarita Verma.
“I’ve known Roger for almost two decades… It’s nothing but an honour to work on a legacy of someone who truly was a rural and remote physician,” she added.
“I couldn’t think of anyone better suited to step up and lead the school to the next stage of development,” said Dr. Strasser.
Verma shared that building on Dr. Strasser’s term is an opportunity to provide more than just health care and education.
“Although we produce 194 family doctors, and physicians, for the north, which is fantastic, I think we have to continue to look for solutions to food security, to water security, housing security, personal security… Building on that legacy is really an opportunity to do that,” she said.
Dr. Strasser shared his love for Sioux Lookout, and the SLMHC, when asked about having his final board retreat here.

“It’s spectacular how the implementation of this hospital is really respectful of the many cultures that make up the wider communities in Sioux Lookout and in the north. It provides excellent health care, the sort of health care that everyone aspires to, so it’s a fantastic community. I love being here every time,” he concluded. 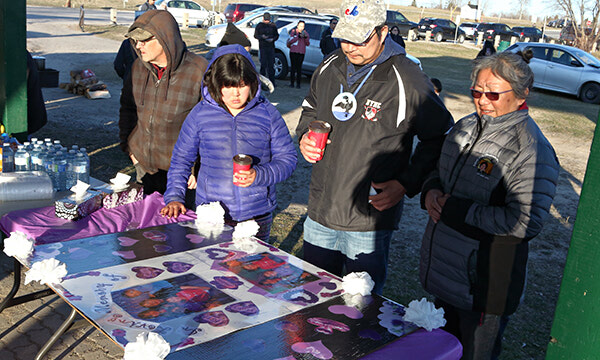 More than 200 people visited the town beach on the evening of May 6 for a vigil in support of the people of Kitchenuhmaykoosib Inninuwug (KI) First Nation.