The Sioux Lookout Chamber of Commerce has preparations underway to conduct its Pop-Up Markets for this year, enabling space to sell for local, home-based businesses. The Chamber’s Executive Assistant Kayleigh Bates said, “The main idea behind them was to give small, at-home basic business in Sioux Lookout, a type of storefront for a day. They can come out and set up shops and have a public space, where people could come and shop, instead of their homes.”

Pop-Up Markets, that will be taking place at the Travel Information Centre on several dates throughout the year, will ensure all COVID regulations are being adhered to. Bates shared that the Chamber had initially discussed doing the markets in 2019. However, it was only last year that the idea took off. Bates said, “Our first ones kicked-off in June 2020, and so, we were running them outside, which was great. The weather was prefect and it allowed for people to practice social distancing and keep everyone safe. For those ones, we were able to have two vendors for outdoor ones…just because there’s a lot of space in the parking lot.”

Bates said that the pop-up indoor markets that took place before Christmas last year, were restricted to just one shopper being indoors at a time. “We are still only doing one inside, but as things warm up and we are able to move outdoors, we’ll probably look into having two at a time again,” she added. Vendors interested in taking part can contact the chamber office at (807) 737-1937 or email [email protected]. People can stay up to date on Chamber Pop-Up Markets by visiting Sioux Lookout Chamber of Commerce’s website or Facebook page.

Bates shared that the Chamber is also planning on running 10 farmers markets this year, between June 4 and October 8. While it will depend on the COVID regulations at the time, Bates said that last year, the market was set up to allow people to only walk in one direction. “So, it definitely cut down on having a large amount of people at the market at one time. So, we did have some strict guidelines that people had to follow throughout the market and it will probably look the same this year, as it did last year,” she added.

The Chamber is running a campaign encouraging people to shop local. Bates said, “The tagline that we’re using is ‘When you shop local, you’re supporting the whole community,’ and we also want to invite anybody who is not currently a member of the chamber, to become a member. They can find those forms on our website, or they can contact us by phone or email.” 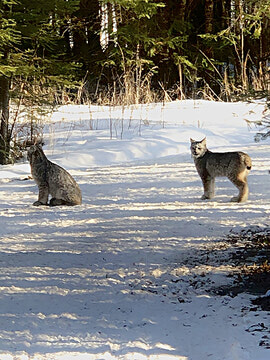 This pair of lynx were sighted at the entrance of a snowmobile trail on Sturgeon River Road last
Friday evening.