On November 30 the Sioux Lookout Bombers, in cooperation with the Rotary Club of Sioux Lookout, hosted their first annual Mental Health Awareness night, an initiative which was spearheaded by several Bombers players, including #26 Aiden Parker.
The Bombers shared that, “Between the auction of our special game worn jerseys, sale of wristbands, the 50/50 draw (conducted by the Rotary Club) and other donations, you raised $2840 in support of mental health, $1500 of which (is) going directly to local mental health programs, and the remainder to the national Movember campaign.”
On Jan. 7, during the first period intermission of the Bombers’ game against the visiting Fort Frances Lakers, representatives from the Bombers and Rotary Club of Sioux Lookout presented a cheque for $1500 to members of the Sioux Lookout Meno Ya Win Health Centre Foundation and (SLMHC) Mental Health and Addictions Program.
Rotary Club of Sioux Lookout Treasurer Susan Barclay said of supporting the Mental Health and Addictions program, “It’s a much-needed thing in our community. I think we’re all aware there’s a lot of people struggling and in need of service and anything we can do to help out, I think it’s a great idea.”
Barclay said the Rotary Club is thankful to all of the fans that supported the 50/50 draw, without whom it would not have been possible to raise these funds.
SLMHC Mental Health and Addictions Program Manager Michelle Turner said of the support from the Rotary Club, the Bombers and the community, “I think it’s wonderful and really incredible. I think mental health is more important now than it ever has been with COVID and all the effects of that, so I think it’s really great and we’re grateful to the Bombers and the community for helping us support that.”
Bombers President / Business Operations, Joe Cassidy said of the funds raised during the game and the team shining a spotlight on mental health, “I think it’s a cause that people are becoming more and more aware of in society today. I think the fact that we were able to put on a game in support of that and raise some funds and help support mental health locally; we reached out to other vendors at that game and some other folks that do support mental health through other initiatives, this being our first major partnership and fundraising game and specialty jersey night, I thought it went really well. It was nice to see the support from everyone and help raise the funds to give back a bit in the community.” 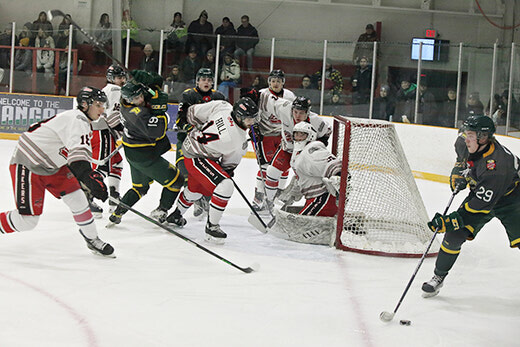 A pair of wins for the Sioux Lookout Bombers as they start the second half of their season. The Bombers hosted the Fort Frances Lakers on Jan. 6 and 7, at the Hangar (Sioux Lookout Memorial Arena)...