The Sioux Lookout Bombers will be one step closer to being game ready when they wrap up their first ID Camp in Kenora which takes place April 1-3. The three-day camp, taking place at the Keewatin Memorial Arena, is still in the process of being finalized but things are moving ahead quickly.

As Austen Hoey, Bombers Director of Hockey Operations, explained. “We are kind of in the early process here. We’ve got a decent number of kids signed up so far. We’re pretty excited with the progress we’ve made and we’re super excited to get going with the camp. We are about 25 percent full right now. We can only take the first 80 kids or 80 players, so if anyone is interested in signing up, we encourage them to get on board to get signed up as soon as possible.”

The reasoning behind the camp running in Kenora has a lot to do with the logistics of travel, as many potential players will be coming from Manitoba, as Hoey explained. “It’s partly due to the fact that we won’t have ice in Sioux Lookout available for that weekend as ice normally goes out the end of March or early April. But the other reason is we want to pull as many kids in as we possibly can, and to be honest the two-hour drive from Winnipeg (to Kenora) is a little bit more palatable than the five-hour drive (to Sioux Lookout). We expect to pull a decent number of kids from Manitoba for the ID Camp, so it’s just a more central location.”

Digging a little deeper into the ID Camp’s goals, Hoey speaks with obvious excitement for the event, stating. “We’re getting a chance to look at some kids maybe we haven’t had a chance to see. Maybe they are not playing on a high-profile team. The thing with hockey is that a lot of the time, kids end up falling through the cracks a little bit. We wanted to make sure we had an opportunity to see kids in the surrounding areas, whether that be from here in Sioux Lookout or Dryden, or Red Lake… the small towns. It’s easy for kids to get missed, and we wanted to be sure that we gave as much of a chance to any of the kids in the surrounding area to get on our radar. If they do want to be on our radar, this is a good chance for them.”

Hoey went on to describe the ID Camp’s format in more detail, stating, “The camp is three days long. You get four ice times, you get one practice with members of the Bombers’ hockey staff… It’s going to have a tournament feel to it. There will be a team gold, a team grey, a team black, and a team green. You’ll stick with your team... you’ll get to meet your teammates, form some bonds and form bonds with the members of the Bombers’ staff. We’ll go through some team building exercises and there will be some presentations about the Sioux lookout Bombers and Sioux Lookout for kids who aren’t aware of Sioux Lookout. And then what we thought was going to be really important was one on one interviews with every player that decides to come to our camp, just to get an idea of what they are looking to be playing, what their goals are for the future, what their chances of being a prospective Bomber are, and just to answer any questions they may have. We’ve got some other teams coming to the ID Camp as well, so we expect it’ll be a really great weekend. If people have any questions, they can give me a call at 807-738-3980.”

As for other Bombers events coming up more for the general public, Hoey added, “February 12, at the Sioux Lookout Golf and Curling Club, will be the first Bombers Trivia Night. It’ll just be general trivia with some themed rounds, but we’ll also be having some fast mini-games and stuff like that to win prizes, so it should be a really good time.” Hoey continued, “We also have our Bombers Golf Tournament coming up, as well. We have that penciled in for July 8.”

Registration information for the Sioux Bombers’ ID Camp can be found at https://bit.ly/3HwieCN. 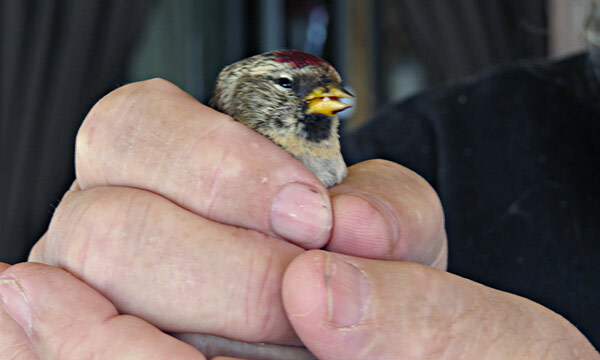 Meet Wendell the Redpoll. This morning he woke up in the branches of a big spruce tree outside our cabin. Nothing distinguished Wendell from five dozen other Redpolls, comfortably clutching the branches of their overnight lodging...