Could Sioux Lookout be the next Ice Fishing Capital of Ontario? It very well could be. The Ontario Ice Fishing Challenge is looking for entrants in its second annual February ice fishing challenge which begins February 1 and runs for the entire month. The premise is simple. Throughout the month of February, anglers are encouraged to get out on the ice and catch as many species of fish as possible. Catch it, photograph it against a measuring device, upload the information through the Angler’s Atlas MyCatch app, and release. Points are awarded for longest fish of various species, including northern pike, walleye, trout and perch. The community with the most points at the end of the tournament wins the title of Ice Fishing Capital of Ontario, an honour which last year went to the community of Wawa.

This year marks Sioux Lookout’s first year being involved in the tournament.

As Brian P. MacKinnon, Manager of Corporate Services /Municipal Clerk explained, “(Sioux Lookout is) a participating community. We have contributed a small amount of money towards the advertising and promotion of the campaign and are actively encouraging local residents to participate. We have entered into an agreement with Angler’s Atlas to verify Sioux Lookout’s participation.”

Sean Simmons is the Founder and President of MyCatch and Angler’s Atlas, which runs the On Ice tournament. As he explained, “My background is in limnology, which is the study of lakes, so I’m a biologist by training. About four years ago we launched an app called MyCatch, which started off as a personal catch log for anglers where we also use the data to work with fisheries researchers across the country (anonymously, so secret spots stay secret). We’ve been at it for a while but then COVID hit and changed the nature of our business considerably.”

Simmons continued, “We started running ‘catch photo release’ tournaments. Now, you can catch and keep, I’m certainly not against harvesting, but it’s a neat way to have a competition and a tournament using a mobile app. The strong conservation side is that you can release the fish in less than a minute, and you can still compete. All you have to do is take a picture of the fish on a measuring device using the app. The catch gets synced up, and reviewed by your catch team, and that information goes to a live leader board. We’ve got these leader boards for things like the longest northern pike, longest lake trout, and also catch diversity as well. People can compete for the most species they can catch, which is a really interesting one where we get a whole bunch of really interesting species. We run these tournaments through our platform MyCatch, and we’ve been running them since COVID hit, and they’ve turned out to be really popular. So that’s kind of a high-level overview how we got to this point here.”

The tournament concept grew out of a conversation he had last year with a community that was having to cancel their local ice fishing tournament due to COVID. They hit upon the idea that it would be fun to have a tournament where different towns could compete together, and that led to the first tournament which saw 22 towns participating. Last year saw 683 anglers across Ontario participate.

Simmons encourages people to get out and “fish anywhere in Ontario where there’s ice,” adding, “We are just promoting this as a fun event, giving people something to do over the long winter months. Last year we had lots of families out competing, and it was just a fun opportunity to get out and compete. And we’re not as closed down as we were last year. Last year there were concerns about travel, so it was kind of fish local.”

While the tournament looks to be a great way to get out and enjoy some ice fishing and friendly competition between communities, it also serves a deeper purpose.

As Simmons points out, the data collected can be invaluable, stating, “We work with research scientists across the country, and we’ve got research partnerships with fisheries researchers at universities across Canada and into the US as well. Working with angler data for University of Alberta, we were able to use angler data for the province of Alberta to actually help inform and predict the spread of Whirling Disease, which is a disease that is taking place in Alberta. I hadn’t even imagined that that would be possible from the data that we are collecting. There’s all sorts of really cool science that can be done. The findings are surprisingly good, compared to mail in surveys and other surveys. We will actually get good length data from the tournament, that’s one of the real values of it, we are getting high quality data.” Simmons added, “We just published last year our first paper in the Canadian Journal of Fisheries and Aquatic Sciences, on the quality of data that we get from anglers. This is compared to traditional, conventional methods just to see what type of data, what does the data look like, and how does it compare to conventional fisheries survey mapping.”

Simmons finished, “Most anglers I know are passionate conservationists. They harvest but they care about the resource, and they know the resource. Having them out there can help inform us on the state of our fisheries, so from the citizen science perspective, we think the anglers hold really important keys. It’s really expensive to do traditional fisheries research, but tournaments are the fun side, where people get to compete for prizes. For them to be able to inform science at the same time, we think it’s an awesome combination.” 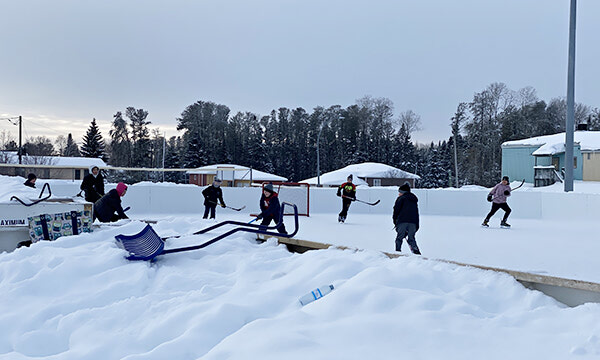