On June 15, the Sioux Lookout Shrine Club hosted a charity golf tournament at the Sioux Lookout Golf and Curling Club to help raise funds for Big Wheels Keep on Turning.
Thanks to the support of the 22 two-person teams who took part, the tournament, which also included live and silent auctions, raised enough money to purchase two wheelchairs for the Shriners Hospital for Children in Montreal. Each wheelchair costs $5000.
Tara Drew organized the charity golf tournament with other ladies of the Sioux Lookout Shrine Club.
She shared previously with The Bulletin, “Each year the Potentate's First Lady (Brenda McKechnie) chooses a charity for which to fundraise. This year the charity is Big Wheels. Each chair that wheels a child to and from their appointments in the Montreal Hospital costs $5000 and Big Wheels Keep on Turning fundraises for and purchases the wheelchairs.  As we now have a Sioux Lookout Shrine Child, this charity hits even closer to home. The ladies of the Sioux Lookout Shrine Club have taken up this torch and our goal is to raise $10,000 for two chairs through our golf tournament.”
“It was an amazing day. The weather was great. The golfing was great, lots of laughter on the golf course. It was a lot of fun,” Drew said, summing up the day.
She wished to thank participants, the businesses and individuals who donated prizes for the event, as well as the Sioux Lookout Golf and Curling Club for hosting the event and the Legion for hosting the steak dinner which followed tournament play.
The winning mixed team was Glen Poirier and his daughter Jenna Poirier.
The winning ladies team was Kim Clark and Delma Clace.
The winning men’s team was Austen Hoey and Matt Monkman.
Clace said it was a beautiful day on the golf course, “The weather was awesome. The course is in great shape. It was a really enjoyable format and what the Shriners are doing for the community and Canada-wide is just awesome. Great cause.”
Glen Poirier agreed, sharing, “It was an awesome time, always great to golf with Jenna. It was great day. Weather was excellent and it was good to support a good cause like the Shriners.”
Kyle Durante golfed with his father. He too said it was a great day.
“It was nice and warm which was good, perfect golfing conditions. We had a fun time. Definitely a good cause.”
John Manno also took part in the charity golf tournament and shared, “It was nice and sunny. The people we golfed with were awesome. It was a great day and a great cause.”
McKechnie was in Sioux Lookout for the tournament and shared with participants, “Thank you very much for everything you’ve done for the Big Wheels Keep on Turning project.” 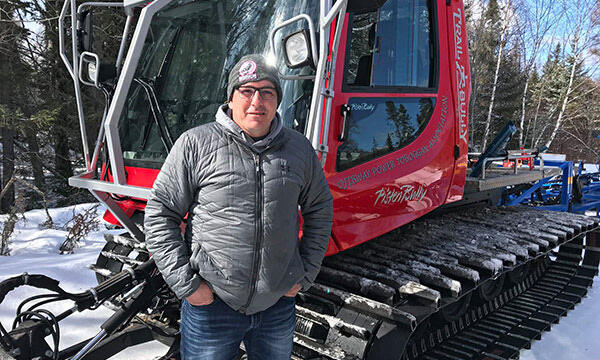 Pat Davis recognized as OPTA Volunteer of the Year

The Ojibway Power Toboggan Association (OPTA), a volunteer organization that maintains snowmobile trails in the Sioux Lookout area, recently recognized Pat Davis as their Volunteer of the Year for the 2018-19 season.