The shoring wall in front of the Red Apple building on Front Street was removed last week. The shoring wall had been in place since March when a portion of the Red Apple store’s ceiling collapsed.
The Municipality of Sioux Lookout informed, “The Municipality has been working with the property owner. The building has been shored-up from the inside, and the engineers have said that the shoring wall in the front of the building can be removed now, as a result of the shoring on the interior.”
The Municipality added that the removal of the shoring wall will, “ensure there are no concerns or issues with snow removal this winter – this has been something we have been keen to address for several months.”
Brian P. MacKinnon, Manager of Corporate Services/ Municipal Clerk for the Municipality of Sioux Lookout shared, “We do not know what the future plans are for the building. Earlier in the summer, we were told that Red Apple had hoped to return, however, we are not aware as to whether or not those intentions have changed.”
Rob Burdett, VP Finance, Logistics, IT & HR for Red Apple Stores ULC informed, “We will continue to work with our landlord on resolving the situation and we look forward to getting back into the community as soon as we can.” 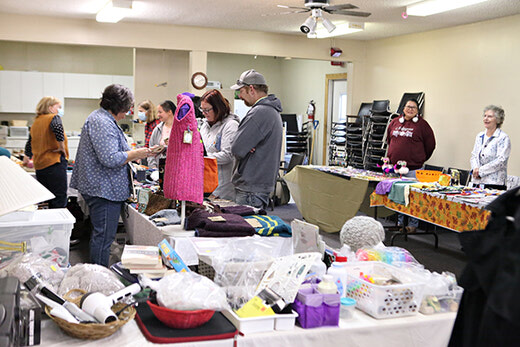 A steady stream of visitors attended the Lost Lake Drop In Centre in Hudson on Oct. 22 to check out a craft and bake sale taking place that day...