Shoreline discovery on Lac Seul gets reunited with owner

Life-long Hudson resident Brad Hyslop, who has been doing amateur archeological work for over 25 years locally, said he recently came across an unexpected discovery along the shorelines of Lac Seul.
“When water levels are low I’m out investigating shorelines on Lac Seul. While I was out exploring shorelines, in one location I came across this brown canvas satchel washed up on the eroded shoreline. I thought it was interesting. I looked at it, thought it was odd, and looked to see inside. If I couldn’t get the zipper to open I was just going to cut it to see what was inside. I was thinking it might’ve been a tackle box or a tool kit,” said Hyslop.
“I managed to wiggle the zipper open. The first thing that came out was a can of insect repellant, and then there was a couple of plastic scoops and a paint brush. I thought it was weird because it didn’t look like a tool kit, a tackle box, or anything. There was a plumb bob, and then I noticed there was, encased in Ziploc plastic, a notebook. There was also card board fragments, which were falling apart, that had writing on them as well. I was able to look at some of the writing on the wet card board, which indicated a location that caught my attention because it referred to the area where a friend of mine, archeologist Jeff Bursey, had been working on an excavation doing a research dig,” Hyslop explained.
Hyslop said he recalled a story that involved a boat capsizing at Pelican Falls almost three years ago. The boat contained Bursey’s archeological data that had gone missing. Hyslop traced the bag back to Bursey, who is now reconnected with some of his old data.
“I remembered a story he mentioned to me where his partner Rachel Garrick was in a boat on July 1 almost three years ago with her brother at Pelican Falls. They ran into a bit of trouble there, and they ended up capsizing the boat… Jeff wasn’t in the boat at the time but he had been and he had left his bag with his archeological data in it, so that was lost. Fast forward three years and I find this satchel, where I see the writing which is the same location where he was digging. I started to think maybe it was Jeff’s bag. It seemed so weird because the area of shoreline I was exploring was more than five kilometres away from Pelican Falls. It was some distance and around several corners in the river in an area where there’s no longer current. It seemed improbable,” Hyslop explained.
“I took a picture on my cell phone, and I emailed the picture to Jeff. I said I had made an amazing discovery but I wasn’t quite sure what it was, and I asked him if he could help me with the identification. Three hours later he emailed me back and said, ‘That looks like my bag.’ Sure enough, it was his bag. It was his bag with his archeological notes, data, and some of his equipment that had been lost three years previously. I don’t know how the bag went that far… It was very unusual that it had gotten that far.
“He has his bag back with the data, and he’s trying to dry it out to see if he can salvage any of the data. He said, if not, at least he got his plumb bob back,” Hyslop concluded. 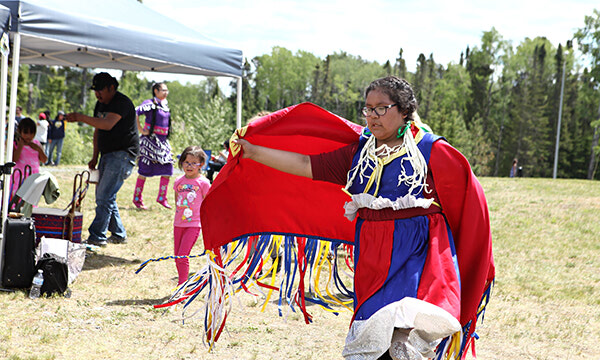