Since the beginning of the school year, Clara Hornig has called Sioux Lookout home during a long-term Rotary Youth Exchange.
Hornig arrived to Sioux Lookout in August from Ganderkesee, Germany, which is located near Bremen, Germany.
Hornig said she’s enjoying Sioux Lookout so far. She said she loves skiing as well as playing other sports for Sioux North High School (SNHS).
“I really love it here. All the people are so nice… I really like the weather too. I like the snow because I like to ski. When I arrived in August, the end of summer was really nice too. It was really nice to go out on the lake,” said Hornig, who is attending grade 12 classes at SNHS.
“I play basketball on the school team, and right now I do curling for the high school team. I also like to cross-country ski with friends and go skating on the lake or at the arena with my friends. I never did curling before, but I really enjoy it and it’s really fun,” she added.
Hornig said some of the biggest differences between Sioux Lookout and Ganderkesee, Germany are the distances between cities, the weather, and schooling.
“The food is very good here. It’s a bit more unhealthy compared to Germany, but it’s just so good… The distances between cities are very different from Germany because everything is close together. In 20 minutes I’m in a city bigger then Winnipeg and in five minutes I’m in a city as big as Thunder Bay, so that’s probably the biggest difference but I still really enjoy it here,” she said.
“The weather is different from Germany. In the winter, in my part of Germany, we usually don’t get snow. Sometimes it snows, but it’s mostly slush because it’s not cold enough… The winters are getting warmer, so the coldest it’s getting is around minus-ten overnight and then usually it’s around zero at the coldest. December is usually quite warm, and sometimes the temperatures can reach ten degrees and higher. It’s pretty cold here. After experiencing minus 30, I never thought minus-ten could feel so warm.
“The schooling is completely different I would say. Here you can choose your subjects and you have four subjects each semester, and in Germany you have 14 subjects in the whole year. We can’t choose any of the subjects… We don’t have each subject every day. With some of the less important subjects we just have two school hours a week for example, but we have to get grades and marks throughout the whole year. We also have exams throughout the whole school year. For the less important classes we’ll have two or three exams for the school year, and then for German, English, and math we’ll have around five exams throughout the year,” she explained.
Hornig will be returning home sometime around the end of July. She said she still has a few more years left of secondary education back home, but she already sees plans of travelling and post-secondary education in her future.
“I’m really interested in going into the medical field to become a doctor or with the police. I would try to go in to the medical field but, if I can’t, I will choose to get into policing,” she said.
“When I’m done high school, and when I’m done school in Germany, I would also love to travel,” she added.
When asked about the Rotary Youth Exchange, Hornig said she would highly endorse them to anyone looking for a new experience while travelling across the globe.
“I would really recommend Rotary Exchange trips for people looking to see new countries, meet new people, and learn new languages. It’s so nice, and it’s such a good experience,” she said.
According to Rotary International, “Long-term exchanges last a full academic year, and students attend local schools and live with multiple host families. Short-term exchanges last from several days to three months and are often structured as camps, tours, or homestays that take place when school is not in session… Students learn a new language, discover another culture, and truly become global citizens. Exchanges for students ages 15-19 are sponsored by Rotary clubs in more than 100 countries.” 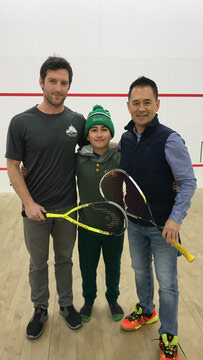 Out and About: Fort Frances Squash Tournament

A competitive showing from the Sioux Lookout Squash Club at the 33rd LaPlace Rendezvous Squash Open Tournament in Fort Frances on January 3-5, 2020.