The Rotary Club of Sioux Lookout has recognized local Rotarians and community members with Paul Harris Fellow awards for contributions both to the club, and the community it services.

The award presentations, made during the club’s Feb. 24 meeting, were handled by Kirk Drew, President of the Rotary Club of Sioux Lookout, and Tara Drew, Club Vice-President. For Rotarians, the Paul Harris Fellow recognition may be presented at any time of year, but for non-Rotarians, the presentations are usually made during February, which corresponds to the month that the first Rotary Club formed in 1905.

The evening’s recipients included Rotarian Wendy MacDonald, for whom this was her second time receiving the honour, along with Rotarian Andreas Kottschoth, a first-time recipient.

Also recognized with Paul Harris Fellow awards were non-Rotarian community members, including Elizabeth Ward, as well as some area residents who were unable to be present at the meeting. As Tara Drew explained, “Tonight we handed out the Paul Harris Fellow to Elizabeth Ward for her contributions to community service over the past years. And then one will go to Charron Sippola, we will present hers when she is back, for her work in the community that’s been going on for years. And Christine Hoey, who was supposed to get hers last year but couldn’t make it… and then was supposed to get it tonight but, again, she’s busy volunteering. So, we will be getting that to her shortly.”

Commenting on recognizing MacDonald and Kottschoth, Kirk Drew added, “We presented one to Wendy (MacDonald), she’s already a Paul Harris Fellow and has donated another $1000 over the past few years. And Andreas (Kottschoth) received his first Paul Harris Fellow. it’s one of those things that we encourage to support the Rotary Foundation. It’s a recognition for them, for supporting the club and supporting Rotary International.” Kirk Drew also pointed out that Rotary International recently elected their first female president, stating, “Our new president elect is Jennifer Jones, she’s our first female Rotary International President, and she’s Canadian. So, it’s a big feather in the hat for Rotary in Canada.”

As he explained, “We are here to support the community. We need people to come on out and become a member. We aren’t worried about who you are, or what you do. Just come out and join and be part of the fellowship. Find out what we are all about. Give us a chance to explain ourselves and to see what we do.  We definitely need volunteers, that’s for sure.”

Speaking after the evening’s presentations, Ward commented, “I’d like to say thanks you to the Rotary Club. To thank them for all the work that they do in Sioux Lookout but also on the international level. It’s an honour to be recognized in this way. “

Kottschoth added, “I just joined Rotary last year. I like to give back to the community, and I believe that Rotary Club is the perfect location to do that. Receiving this is certainly a nice recognition, but the work is not done.” 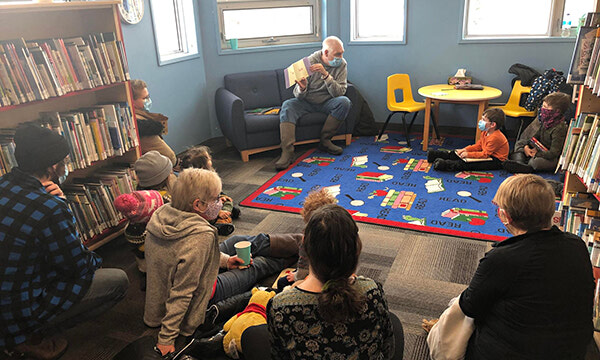