Vermillion Bay native Sarah Smith shared that she had a fun and successful experience racing sled dogs for her first time at the Gunflint Mail Run in Cook County, Minnesota on Jan. 5 and 6.

Despite racing for the first time, Smith shared that working with sled dogs is nothing new for her. She’s currently in her third winter mushing dogs for guide Burton Penner at Borealis Dog Sled Adventures.

“I work at Borealis Dog Sled Adventures, so I guide there. We do a lot of school groups and we do day trips and rides. We also do longer expeditions and overnights. Pretty much anything that people will book it for, so I’ve been doing that the past two winters and this winter as well,” she explained.

“I’m a pilot in the summertime, so I fly for Wilderness Air in Vermillion Bay right now. I needed a job for the winter, and Burton Penner needed a helper. I had been dogsledding before that, but I’ve never worked with him before. I grew up with his kids, so I always knew them and he needed a helper. It worked out well that I can do that in the winter and fly in the summer,” she continued.

It was through working at Borealis Dog Sled Adventures that Smith met Sioux Lookout resident and successful dog sled racer Brian Bergen, who she attended the Gunflint Mail Run with.

“I met Brian through Burton…Brian had actually asked me last winter if I wanted to come to a race with him and his daughter Leanne to handle for him because at the races they maybe need a handler sometimes just to help with the dogs and different things for the race. I was busy, through Burtons, every time he had a race last winter. This winter, his daughter Leanne took a break from dog mushing, so he trained up all these dogs and wanted someone to run them. He asked me if I’d be interested in running a race with him and coming to train every once in a while,” she said.

“The beginning of January isn’t too busy with Burton and I had nothing going on the weekend of the Gunflint Mail Run, so I went in to that with Brian. I would’ve liked to train a lot more than I did, but I went up a few times and ran his dogs with him…I just didn’t have the time unfortunately,” she continued.

When asked about the experience of joining Bergen at the Gunflint Mail Run, Smith said she enjoyed it and she had a great time.

“It was my first experience ever racing and the race dogs that Brian has are different than the dogs that Burton has and the sleds and atmosphere are very different. I did really enjoy it. It was a great experience and, I wasn’t worried about placing or anything, I had a great time. It was a very different experience. At the end I was absolutely wiped right out. It was so much fun, and I’d love to do it again one day,” she said.

Both Bergen and Smith had nothing but good things to say when asked about the opportunity to work with each other leading up to the Gunflint Mail Run.

“She came and trained with me a few times… She ended up joining me and had a lot of fun...I’m very impressed with her. She’s a hard-working 22-year-old,” said Bergen.

Moving forward, Smith said she’d be interested in racing again, but she’d want to be more involved in the training. As far as racing again this year, she won’t be able to due to her busy schedule through guiding with Borealis Dog Sled Adventures.

“This winter, for all the races, there’s a booking through Borealis Dog Sled Adventures…If I was going to pursue it in the future, I’d like to do more training with the dogs myself. Brian really did almost all of the training with the dogs this year and I was just running his team… I would definitely be interested in doing it in the future because it was a great time,” she shared.

“The dogs are really what makes it what it is. They just love it so much. They just love to pull and get out there and do it. That enthusiasm is contagious,” she concluded. 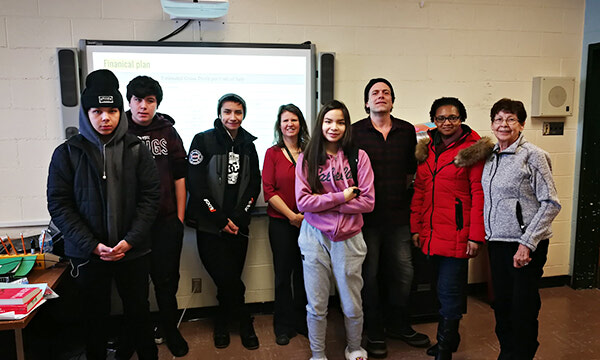 Ten Sioux North High School students who are in the Grade 11 Aboriginal Youth Entrepreneurship Program (AYEP) had the opportunity to present their own business plans in front of local business owners during their culminating presentations on Jan. 23...