For 57 years, Ron Lemmon has been working as a volunteer to improve the snowmobile trails of the Sioux Lookout area. Lemmon is a founding member of the Ojibway Power Toboggan Association (OPTA) and has served as Vice-President and President of the OPTA and has filled many different positions with the association over the years.

The club also focuses on promoting safe snowmobiling by offering training courses and keeping the trails in good condition. Lemmon said that soon after he first starting working, “We got involved with the Ontario Federation (of Snowmobile Clubs) and we were able to purchase groomers for the trails. Before that we made homemade drags and pulled them on the trails with our machines. Once we were able to get a groomer, trials were much improved… the snowmobiles improved so much over the years too.”

OPTA Director and Groomer Coordinator Pat Davis said, “Ron has been with the club for 57 years, since its’ founding. He is one of the four founding members and he served with the club ever since. The last few years he’s been on the Board of Directors as well as looking after the building and signage on the trail straight up until his resignation that we got in August. We decided to have a farewell, just because of his many, many years of contributions to the club.”

Lemmon has shown immense dedication towards the club, contributing 200-300 hours of work most winters. “With my wife’s health not being good, I’ve gone down to 150 hours a year for the last three or four years. I just enjoyed the winter, probably more than I did the summer. I enjoyed getting out and working with the club. Just something that I took a liking to and I just stayed with it,” Lemmon shared.

The OPTA maintains 120 kilometres of local trails and 100 km of the North Western Ontario Snowmobile Trails Association (NWOSTA) Wilderness Loop, which is part of the Trans Ontario Provincial trail network. Davis said that Lemmon was the last of the “old-timers,” and that he was always present and ready for any club event, or any other work that needed to be done. “Ron is the first one to show up and the last one to leave,” he added.

“It was a real honor, they had a catered supper and they presented me with a card and a jacket. It has the OPTA crest on it and it says OPTA on one side and 57 years on the other, which is very nice of them,” Lemmon concluded. 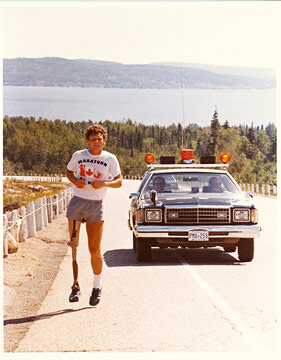 Forty years ago, Canadian icon Terry Fox was forced to stop his Marathon of Hope outside of Thunder Bay.