Sioux Lookout resident Ron Laverty was recognized for his work as a critical care paramedic and Sioux Lookout base manager for Ornge, receiving the Emergency Medical Services Exemplary Service Award for 30 years of exemplary service to Ontario’s patients during a ceremony on Nov. 28 at Queen’s Park.
Laverty was presented with his medal by Lieutenant General Richard Rohmer.
“It’s nice to be recognized by your peers and by the province for the work you do, so it was quite flattering and I was quite honoured by it,” said Laverty.
“We’re very proud of Ron Laverty for his exemplary service and accomplishment,” said Cara Chambers, Director of Base Management for Ornge.
“Ornge, and all of his colleagues at the bases across the province, wish to congratulate Ron and thank him for his compassionate professionalism, mentorship and service to our province,” she said.
The 63-year-old said he’s enjoyed traveling and taking care of patients across Ontario throughout his career.
“It’s wonderful working for Ornge. My whole career has pretty well been air ambulance, and it’s really rewarding to travel into the north, pick patients up, and travel across Ontario out of Sioux Lookout. I’ve flown in and out of just about every community that has an airport in the province by taking patients from one community to another to receive care and getting them stabilized. Taking care of people is why I got into the job in the first place. I wanted to help people, so it’s a great way to help my community here in Sioux Lookout. I’ve lived here just about my whole life,” said Laverty.
Laverty said, as part of the nomination process, your accolades in and out of your profession are analysed. For Laverty, some of those accolades include working with the Canadian Minor Hockey Association and the Canadian Paramedic Association.
“What they do is, when you get nominated, they take a look at your career and the things that you’ve done either professionally or outside of your profession to get the award. I’ve been with the Canadian Minor Hockey Association developing the trainers program. I did a lot of work with the Canadian Paramedic Association developing education standards… Those are the two highlights of my career professionally and non-professionally,” he said.
A press release from Ornge provided a history of Laverty’s career, stating, “Ron Laverty began his Paramedic career in 1988 as a volunteer ambulance attendant for Sioux Lookout Hospital. In 1989, he joined Voyageur Airways as a flight paramedic servicing Sioux Lookout and Ontario’s far north. Ron became one of Ontario’s first Critical Care Paramedics in 1991 and continued to serve the communities of Northwestern Ontario as a CCP until becoming a Base Manager for the newly formed Ornge Air Ambulance service in 2009. Ron continues to serve as Ornge’s Base Manager in Sioux Lookout, along with providing training to many northern first nations communities throughout Northwestern Ontario.”
“Ornge, a not-for-profit organization, co-ordinates all aspects of Ontario's air ambulance system, the critical care land transport program, paediatric transport program and the authorization of air and land ambulance transfers between hospitals. Ornge performs more than 20,000 patient related transports in Ontario each year,” the press release shared. 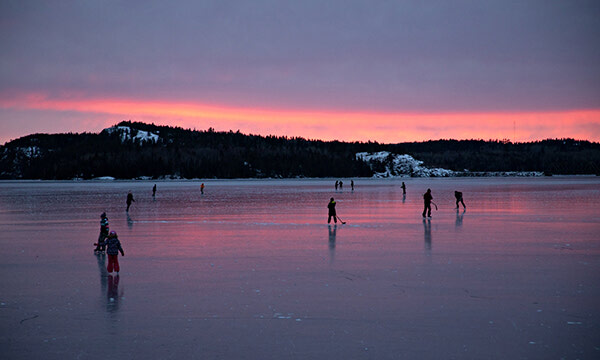 Sioux Lookout and area residents have been lacing up their skates and taking advantage of the local outdoor skating opportunities.