The annual fundraising ride will start at the Ojibway Power Toboggan Association Clubhouse located on 108 Abram Lake Road. Registration will begin at 8:30 a.m. with the group looking to begin their ride at around 9:30. After a brief stop in Hudson, the group will be following the “A” Trail to Pizza Hut in Dryden, a ride that has been popular in the past.

“We did it in 2017 and a lot of people liked it. It’s all trail ride this way too. We don’t have a lot of snow right now, but the trails will hopefully be groomed the best they can,” said organizer Mike Starratt.

“Usually I’ll take people up by Lac Seul and the ride usually has more of a nature element, but this year we’re keeping it to just the trails so it will be more of an adventure ride,” he continued.

According to www.easterseals.org, “For the past 95 years, Easter Seals has played an important role in providing support for children and youth with physical disabilities… Easter Seals is a registered charitable organization that helps children and youth with physical disabilities from all ethnic and religious backgrounds. We assist families with the purchase of costly mobility equipment such as wheelchairs, walkers, porch lifts, and ramps, as well as communication devices, toileting aids, and bathing equipment. Easter Seals also helps by providing summer camp opportunities at our two properties, Camp Merrywood and Camp Woodeden.”

Organizer Tracey Ellek said the ride has turned into an all-day affair with riders coming to participate from across the region.

“It ends up being an all-day event. We’ll leave around 9:30, hopefully, and we’ll be back by 4:30-5. We get people from Dryden, Red Lake, Sioux Lookout, Lac Seul, and Hudson. We’ve been getting more participants from surrounding areas,” she said.

Both organizers agreed that the ride is a great way to socialize and support a good cause, which has led to consistent rider counts of over 50 participants per year.

“It’s a great reason to go for a ride and meet new people. It helps bring in new people, and we really try to emphasize that the event isn’t a race. We’re all together and we ride as a group,” said Ellek.

“We’ve had at least 50 participants the past four or five years. We hope it can get more people into snowmobiling and help promote winter activities and tourism. We’ll be joined by members of Lac Seul Police Service, Railside Sports and Marine, Red Lake Marine Products, Lakeside Marina, and McKinstry Chrysler. It’s a nice, big group ride,” Starratt concluded.

Anyone who would like to support the cause can go online and pledge at www.snowarama.org. Registration is available at the same link.

Anyone who would like more information about this year’s Sioux Lookout – Hudson, Red Lake Snowarama for Easter Seals Kids, or who would like to support the event, can contact Ellek at 807-737-3050, or Starratt at 807-737-4777. 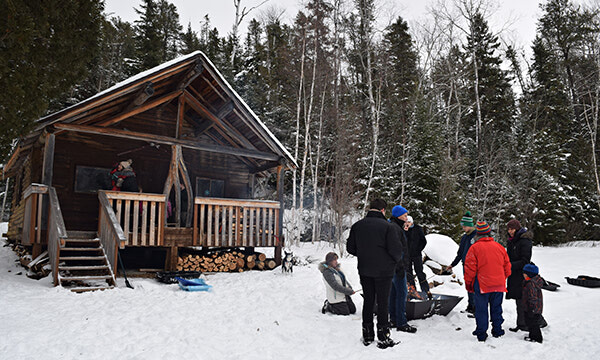 Located at the Cedar Bay lakeshore, the Cosy Cabin opened its doors while kicking off Cosy Cabin Saturdays on Jan. 5.