Residents team up to support the SLMHC Foundation

A group of eight local women have teamed up to form the Friends of the Foundation and contribute to the Sioux Lookout Meno Ya Win Health Centre Foundation (SLMHCF) on a personal level due to the adverse affects of the pandemic on the Foundation’s usual fundraisers. A member of the group, Jackie Duhamel shared, “We saw that there is still a need to raise money for the Foundation and we have been in each other’s bubble since the beginning, so why not get together and do some crafting and create some items that we would normally donate to Skip to Equip and have them up for auction, so we could raise money for the Foundation.”
Two major fundraisers which support the Foundation annually, the Bearskin Airlines Charity Golf Tournament and the Bearskin Airlines Skip to Equip Curling Classic, were not able to take place this year due to the COVID-19 global pandemic.
With two members of Friends of the Foundation also being a part of the SLMHC Foundation Board, they realized the huge difference in donations received by the health centre this year, which motivated them and their friends to personally act. The SLMHC Foundation usually receives approximately $125,000 through different donations each year. However, this year, “It’s a drop in the bucket,” said Duhamel.
She said, “There is always the need for donations and contributions to the health foundation because there is always a need for funding for different programming and new equipment, which the government doesn’t provide funding for, replacing equipment or new programs within hospitals. So there is always a need for money for the hospital, and we thought why not make it fun and do whatever we can do. It’s not a lot but it’s something, and maybe it will inspire others to think about donating an item for auction and with the proceeds going in to the hospital foundation, that would be terrific if it would spark interest with other groups.”
The fundraising auction began on Nov. 14 and is being conducted in groupings, with each auction open for about a three-day period. Auctions will also be held this week.  All of the items are being posted on the STORAGE WARS - Sioux Lookout & Area Facebook page.
“We are pleased with the outcome and again if we can inspire other people to make donations to the Foundation, however that looks, I think that would be exciting to see. And the fact that we expect that Skip to Equip will be back on next year and so this type of thing that we have done just on our own would then revert back to Skip to Equip, assuming that it can operate and run like it normally has,” said Duhamel.
The Treasurer at the Sioux Lookout Meno Ya Win Health Centre Foundation, Rita Demetzer said, “I think it is a wonderful idea. I was told about it a few days ago and I think it’s great. To my understanding, it is a group of women who are ones that would normally be participating in the Skip to Equip and because that’s been cancelled because of COVID, they’re trying to auction a number of items that they created or have, so that they can raise money for the Foundation. We are certainly very appreciative that they are taking the time to do that.”
SLMHCF recently launched a monthly online 50/50 raffle beginning November 10, aiming to support the Foundation.
The Chair of SLMHCF, Christine Hoey commented, “It’s on Sioux Lookout Meno Ya Win Health Centre Foundation’s website and as soon as you click on it, it’s the first thing you’ll see. It’s on their whole page. It says right there, ‘Buy Tickets’ and then it takes you to the page to buy the tickets.”
Hoey said that the Foundation Board has been working diligently on the fundraiser, adding that the Foundation appreciates the community’s support.
“All of the money we’re raising stays local. It goes directly into our equipment fund at the Foundation, which we then give to the hospital where they need to purchase any kind of equipment at all; we raise the money for it. We really hope the community will support us and if they have any questions at all, they can contact the Foundation office at (807) 738-0566.” 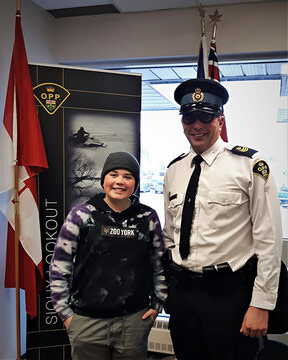 Jason Duewel is a thirteen year-old transgender male from Sioux Lookout. Since the time he was three or four years old, he found himself gravitating to more typically masculine activities and clothing. Jason advised that when he was ten years old, he...